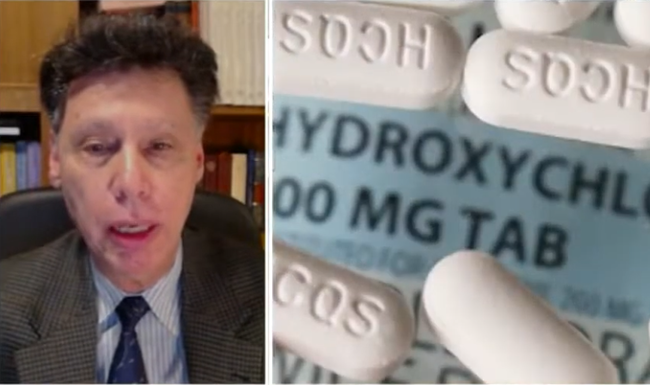 Dr. Harvey Risch, an Ivy League epidemiology professor has asserted that hydroxychloroquine — the drug that has been at the centre of a politicised medical debate for the last several months — is “the key to defeating COVID-19,” and that medical officials should be widely prescribing it to save the lives of thousands of coronavirus patients.

Recall that the World Health Organisation initially recommended the drug, but later withdrew the recommendation. This followed some scientific studies that discredited the drug and also pointed out some fatal side effects.

On Monday, Cameroonian-born Dr Stella Immanuel in Washington D.C. brought the drug back into public arena, claiming she had used it, along with Zinc and Azithromycyin, to great effect, to treat 350 COVID-19 patients.

As debate continues to rage over the efficacy of hydroxychloroquine as cure for COVID-19, Risch, a professor of epidemiology at Yale University School of Public Health as well as the director of that school’s Molecular Cancer Epidemiology Laboratory, has argued in a Newsweek op-ed published on 23 July 2020 that “the data fully support” the wide use of hydroxychloroquine as an effective treatment of COVID-19.

The article is entitled: ‘The Key to Defeating COVID-19 Already Exists. We Need to Start Using It | Opinion’

Anthony Fauci, a member of the White House coronavirus task force and the nation’s top infectious disease expert, again stated, in light of the Immanuel video, that the drug is not effective in treating COVID-19.

Fauci told MSNBC host Andrea Mitchell on Wednesday that scientific evidence has shown “consistently that hydroxychloroquine is not effective in the treatment of coronavirus disease, or COVID-19.”

But days before Immanuel’s impassioned speech in Washington, Harvey A. Risch, Professor of Epidemiology, Yale School of Public Health in a now viral Newsweek article, published 23 July, canvassed for the use of the drug to treat COVID-19.

“The key to defeating COVID-19 already exists. We need to start using it”, said the title of the article.

But he warns that the drug is effective when used early on afflicted patients.

Vermund in the press release said: As Dean of the Yale School of Public Health where Dr. Risch is employed, I have championed maintaining open academic discourse, including what some may view as unpopular voices.

“The tradition of academia is that faculty may do research, interpret their work, and disseminate their findings. If persons disagree with Dr. Risch’s review of the literature, it would be advisable to disseminate the alternative scientific interpretations, perhaps through letters or other publications with alternative viewpoints to the American Journal of Epidemiology, Newsweek, or other outlets.

“My role as Dean is not to suppress the work of the faculty, but rather, to support the academic freedom of our faculty, whether it is in the mainstream of thinking or is contrarian”.

Vermund further attested to Risch’s scholarly pedigree and the fact that the controversial drug was applied in the early days of COVID-19 in America.

“Dr. Harvey Risch is a distinguished cancer epidemiologist who has opined on the topic of hydroxychloroquine (HCQ) and COVID-19 out-patient therapy.

“He has written a review article in the American Journal of Epidemiology that cites evidence that he believes supports HCQ use for out-patient infection with SARS-CoV-2.

“Studies that indicate no effect or harmful effects, Dr. Risch believes, enrolled patients too sick to benefit from HCQ.

“Yale-affiliated physicians used HCQ early in the response to COVID-19, but it is only used rarely at present due to evidence that it is ineffective and potentially risky,” Vermund said.

As professor of epidemiology at Yale School of Public Health, I have authored over 300 peer-reviewed publications and currently hold senior positions on the editorial boards of several leading journals. I am usually accustomed to advocating for positions within the mainstream of medicine, so have been flummoxed to find that, in the midst of a crisis, I am fighting for a treatment that the data fully support but which, for reasons having nothing to do with a correct understanding of the science, has been pushed to the sidelines. As a result, tens of thousands of patients with COVID-19 are dying unnecessarily. Fortunately, the situation can be reversed easily and quickly.

I am referring, of course, to the medication hydroxychloroquine. When this inexpensive oral medication is given very early in the course of illness, before the virus has had time to multiply beyond control, it has shown to be highly effective, especially when given in combination with the antibiotics azithromycin or doxycycline and the nutritional supplement zinc.

On May 27, I published an article in the American Journal of Epidemiology (AJE) entitled, “Early Outpatient Treatment of Symptomatic, High-Risk COVID-19 Patients that Should be Ramped-Up Immediately as Key to the Pandemic Crisis.” That article, published in the world’s leading epidemiology journal, analyzed five studies, demonstrating clear-cut and significant benefits to treated patients, plus other very large studies that showed the medication safety.

Physicians who have been using these medications in the face of widespread skepticism have been truly heroic. They have done what the science shows is best for their patients, often at great personal risk. I myself know of two doctors who have saved the lives of hundreds of patients with these medications, but are now fighting state medical boards to save their licenses and reputations. The cases against them are completely without scientific merit.

Since publication of my May 27 article, seven more studies have demonstrated similar benefit. In a lengthy follow-up letter, also published by AJE, I discuss these seven studies and renew my call for the immediate early use of hydroxychloroquine in high-risk patients. These seven studies include: an additional 400 high-risk patients treated by Dr. Vladimir Zelenko, with zero deaths; four studies totaling almost 500 high-risk patients treated in nursing homes and clinics across the U.S., with no deaths; a controlled trial of more than 700 high-risk patients in Brazil, with significantly reduced risk of hospitalization and two deaths among 334 patients treated with hydroxychloroquine; and another study of 398 matched patients in France, also with significantly reduced hospitalization risk. Since my letter was published, even more doctors have reported to me their completely successful use.

My original article in the AJE is available free online, and I encourage readers—especially physicians, nurses, physician assistants and associates, and respiratory therapists—to search the title and read it. My follow-up letter is linked there to the original paper.

Beyond these studies of individual patients, we have seen what happens in large populations when these drugs are used. These have been “natural experiments.” In the northern Brazil state of Pará, COVID-19 deaths were increasing exponentially. On April 6, the public hospital network purchased 75,000 doses of azithromycin and 90,000 doses of hydroxychloroquine. Over the next few weeks, authorities began distributing these medications to infected individuals. Even though new cases continued to occur, on May 22 the death rate started to plummet and is now about one-eighth what it was at the peak.

A reverse natural experiment happened in Switzerland. On May 27, the Swiss national government banned outpatient use of hydroxychloroquine for COVID-19. Around June 10, COVID-19 deaths increased four-fold and remained elevated. On June 11, the Swiss government revoked the ban, and on June 23 the death rate reverted to what it had been beforehand. People who die from COVID-19 live about three to five weeks from the start of symptoms, which makes the evidence of a causal relation in these experiments strong. Both episodes suggest that a combination of hydroxychloroquine and its companion medications reduces mortality and should be immediately adopted as the new standard of care in high-risk patients.

Why has hydroxychloroquine been disregarded?

First, as all know, the medication has become highly politicized. For many, it is viewed as a marker of political identity, on both sides of the political spectrum. Nobody needs me to remind them that this is not how medicine should proceed. We must judge this medication strictly on the science. When doctors graduate from medical school, they formally promise to make the health and life of the patient their first consideration, without biases of race, religion, nationality, social standing—or political affiliation. Lives must come first.

Second, the drug has not been used properly in many studies. Hydroxychloroquine has shown major success when used early in high-risk people but, as one would expect for an antiviral, much less success when used late in the disease course. Even so, it has demonstrated significant benefit in large hospital studies in Michigan and New York City when started within the first 24 to 48 hours after admission.

In fact, as inexpensive, oral and widely available medications, and a nutritional supplement, the combination of hydroxychloroquine, azithromycin or doxycycline, and zinc are well-suited for early treatment in the outpatient setting. The combination should be prescribed in high-risk patients immediately upon clinical suspicion of COVID-19 disease, without waiting for results of testing. Delays in waiting before starting the medications can reduce their efficacy.

Third, concerns have been raised by the FDA and others about risks of cardiac arrhythmia, especially when hydroxychloroquine is given in combination with azithromycin. The FDA based its comments on data in its FDA Adverse Event Reporting System. This reporting system captured up to a thousand cases of arrhythmias attributed to hydroxychloroquine use. In fact, the number is likely higher than that, since the reporting system, which requires physicians or patients to initiate contact with the FDA, appreciably undercounts drug side effects.

But what the FDA did not announce is that these adverse events were generated from tens of millions of patient uses of hydroxychloroquine for long periods of time, often for the chronic treatment of lupus or rheumatoid arthritis. Even if the true rates of arrhythmia are ten-fold higher than those reported, the harms would be minuscule compared to the mortality occurring right now in inadequately treated high-risk COVID-19 patients. This fact is proven by an Oxford University study of more than 320,000 older patients taking both hydroxychloroquine and azithromycin, who had arrhythmia excess death rates of less than 9/100,000 users, as I discuss in my May 27 paper cited above. A new paper in the American Journal of Medicine by established cardiologists around the world fully agrees with this.

In the future, I believe this misbegotten episode regarding hydroxychloroquine will be studied by sociologists of medicine as a classic example of how extra-scientific factors overrode clear-cut medical evidence. But for now, reality demands a clear, scientific eye on the evidence and where it points. For the sake of high-risk patients, for the sake of our parents and grandparents, for the sake of the unemployed, for our economy and for our polity, especially those disproportionally affected, we must start treating immediately.

*Harvey A. Risch, MD, PhD, is professor of epidemiology at Yale School of Public Health.