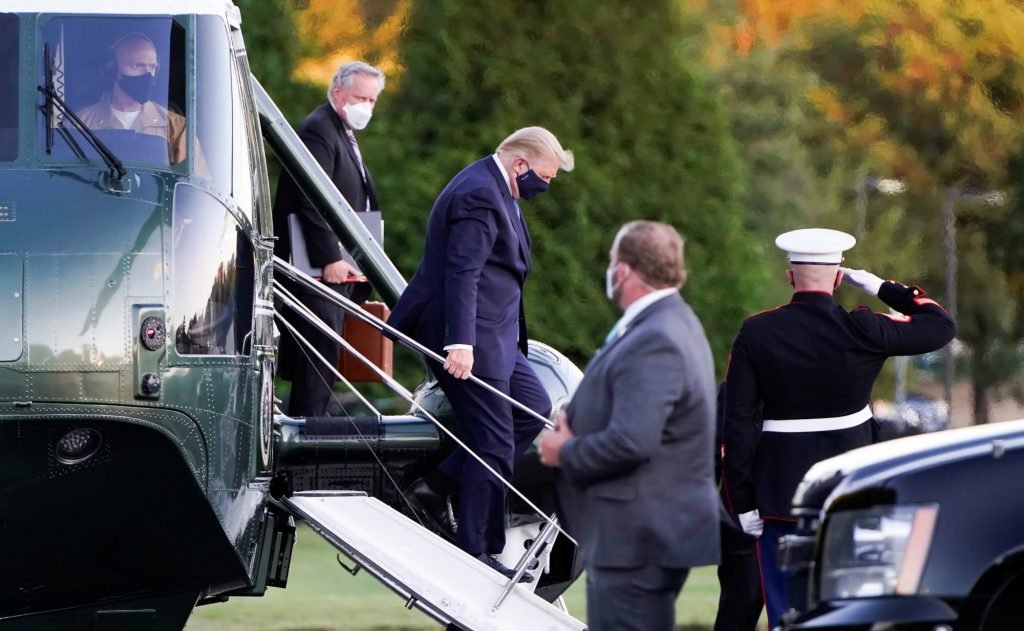 US President, Donald Trump has been transported to Walter Reed medical centre after developing mild symptoms from the deadly coronavirus infection.

This was made known in a statement released by the White House on Friday.

According to the statement, the president will spend “the next few days” at the military hospital in Maryland.

“Out of an abundance of caution, and at the recommendation of his physician and medical experts, the President will be working from the presidential offices at Walter Reed for the next few days,” the statement read.

Earlier, the White House has said Trump’s symptoms are mild and that he is in good spirits, but he has not been seen in public since the news of the positive COVID-19 test.

“President Trump remains in good spirts, has mild symptoms, and has been working throughout the day. Out of an abundance of caution, and at the recommendation of his physician and medical experts, the President will be working from the presidential offices at Walter Reed for the next few days. President Trump appreciates the outpouring of support for both he and the First Lady,” White House press secretary Kayleigh McEnany said in a statement.

‘I Was Paid To Pretend I Had Covid19’- South African…

The White House on Friday said Trump had been given a cocktail of antibodies and is feeling fatigued.

White House physician Sean Conley said Friday that Trump “remains fatigued but in good spirits” and received a cocktail of polyclonal antibodies as a precautionary measure after being diagnosed with the novel coronavirus.

“As a precautionary measure he received a single 8 gram dose of Regeneron’s polyclonal antibody cocktail. He completed the infusion without incident,” Conley said in a memorandum issued Friday afternoon.

“In addition to the polyclonal antibodies, the President has been taking zinc, vitamin D, famotidine, melatonin and a daily aspirin,” he added.