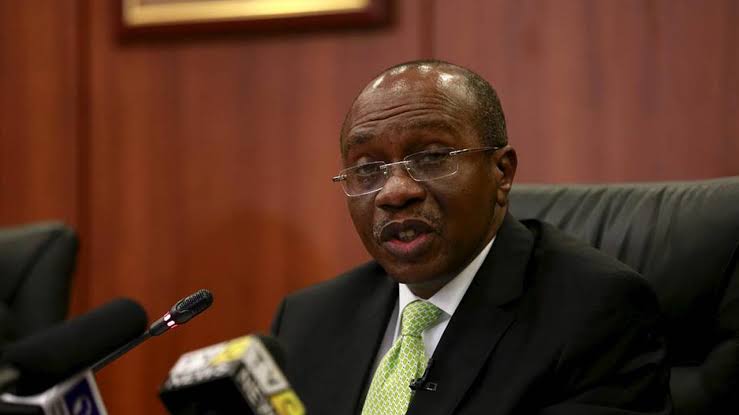 The Governor of Central Bank of Nigeria, Godwin Emefiele has stated that Nigeria will exit its recession in the first quarter of 2021.

According to the recent gross domestic product (GDP) numbers released by the National Bureau of Statistics, the nation recorded a contraction of 3.62 percent in the third quarter of 2020.

This is the second consecutive quarterly GDP decline since the recession of 2016. The cumulative GDP for the first nine months of 2020, therefore, stood at -2.48 percent.

Speaking at the 55th Chartered Institute of Bankers of Nigeria (CIBN) dinner in Lagos on Friday, the CBN governor said there is no cause to panic.

He said prior to the recession, Nigeria witnessed 12 consecutive quarters of economic expansion after a similar experience in 2016.

“As we are all aware, prior to the onset of the virus in December 2019, the Nigerian economy was on a positive growth trajectory, having made a significant recovery from the 2016-2017 recession, which was triggered by the drop-in commodity prices in 2016,” he said.

“Following the recession, we witnessed 12 consecutive quarters of economic expansion, and GDP growth in the fourth quarter of 2019 stood at 2.55 percent. Our exchange rate remained stable for over two years at N360/$ and our external reserve witnessed significant accretions from the sale of crude oil and continued inflows from foreign investors.”

Emefiele explained that positive improvement in growth has been recorded in several sectors of the economy.

He said the Nigerian Stock Exchange (NSE) all share index rose by 65 percent between April and November 2020.

The CBN governor said recovery from the ongoing recession is in sight as the country will bounce back in the first quarter of 2021.

He urged banks to provide more funding for ICT, agriculture and infrastructural development.

“Furthermore, 36 out of the 46 economic activities tracked by NBS, reflected positive improvements in growth, which includes activities that recorded negative growth. In the Investors and Exporters Window, close to $150m is being traded daily as a result of our measures to sanitize activities in the foreign exchange market,” he said.

“In addition, the Nigerian Stock Exchange All Share index rose by 65 percent between April and November 2020, reflecting improved sentiments by investors on the fundamentals of publicly listed companies. As a result of these measures, GDP growth in the third quarter, improved to -3.6 percent from -6.1 percent in quarter two, even though the economy fell back into a recession.

“We however expect that Nigeria would emerge from the recession by the first quarter of 2021, due to high frequency data that indicates continued improvements in the non-oil sector of our economy.

“We also expect that growth in 2021 would attain 2.0 percent. However, downside risks remain, as restoration of full economic activities, particularly in service related sectors, remains uncertain until a COVID-19 vaccine is produced and made available to millions of people across the world.”

Present at the event was Babajide Sanwo-Olu, governor of Lagos, who assured stakeholders in the banking sector of security of lives and property in the state.

Sanwo-Olu commended Emefiele for the economic interventions by the CBN,  appreciating bankers in the state for the support provided to the Lagos state government.

He added that his administration is also working on measures to boost revenue through several measures including the production of rice.