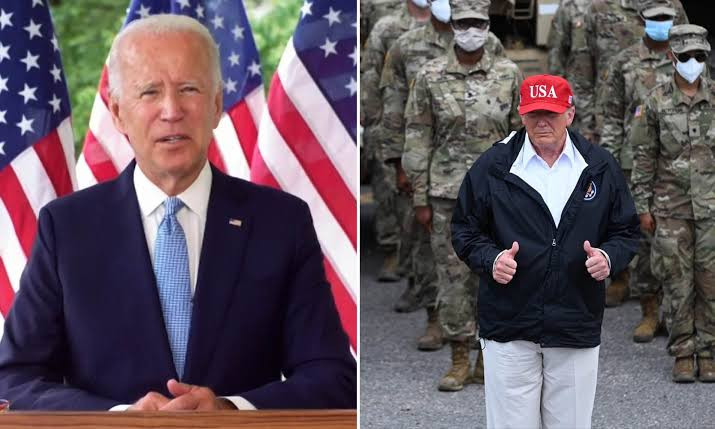 US multiple reports revealed that President of United States, Joe Biden is expected to sign an executive order on Monday, January 25 that will lift the Pentagon’s ban on transgender people serving in the military put in place by ex-president Donald Trump.

Recall that the controversial ban was announced by former President Donald Trump in 2017  and reversed the Obama administration’s policy to allow anyone including transgender and gay people from serving in military.

New US Defense Secretary Lloyd Austin will be with Biden on Monday when the executive order will be signed.

“The ban will be officially lifted tomorrow,” said a White House official on Sunday to ABC news.

Biden had said during the presidential campaign that he favored repealing the ban.

In May 2020, Biden had said he would direct the Pentagon to let “transgender service members serve openly and free from discrimination in the military.”

“They can shoot as straight as anybody else can shoot,” he added.

At his confirmation hearing last week Austin had said he would support an effort to repeal the ban.

“I support the president’s plan to overturn the ban,” Austin told the Senate Armed Services Committee.

“If you’re fit and you’re qualified to serve and you can maintain the standards, you should be allowed to serve, and you can expect that I will support that throughout.”

Some advocacy groups say as high as 15,000 individuals are transgender in the US military.

In 2016, Defense Secretary Ash Carter announced a policy that would allow transgender individuals to serve in the U.S. military openly.

But in July 2017, Trump issued a series of tweets that immediately banned such service.

The new policy required service members and those wishing to join the military to adhere to the standards associated with their biological sex.

Service members diagnosed with gender dysphoria, defined as “a marked incongruence between one’s experienced/expressed gender and assigned gender … associated with clinically significant distress and impairment of functioning,” were no longer allowed to receive medical surgeries for gender transition unless they were currently in the process of receiving medical treatment.

Transgender individuals who had received hormones or medical surgery related to their transition were barred from joining the military, even if they could prove stability in their preferred gender.