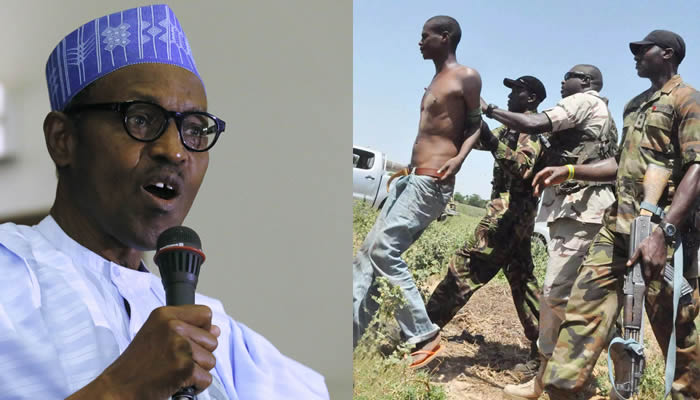 A week-long cease fire between the Federal Government and Boko Haram insurgents ended, yesterday, five days after the insurgents used the window to return 107 girls and a boy they captured from Dapchi, Yobe State.

The week-long ceasefire is besides ongoing broader negotiations for a permanent ceasefire with the insurgents, Minister of Information, Alhaji Lai Mohammed, said at a press conference in Lagos, yesterday.

Mohammed, who lampooned Peoples Democratic Party, PDP, for allegedly politicising the release of the girls, called for new provisions to deregister political parties like the PDP, which, according to him, fall short of patriotic fervour.

He reiterated his claim that no money was paid for the release of the Dapchi schoolgirls, adding that a total of 111 students were captured and two others, including a boy selling sachet water in the school and another primary schoolgirl. In all, he said a total of 113 persons were taken away.

The minister said the insurgents were compelled to release the students and others because their capture offended long running negotiations with them for a settlement of the crisis. He said the recent release of the police officers’ wives and the University of Maiduguri lecturers earlier captured by the insurgents were part of the broader talks.

He said:  “A total of 111 girls were abducted from the Government Girls Secondary and Technical College, GGSTC, in Dapchi on February 19, 2018. That means one student was not captured on the list of 110 abducted students that was compiled by the school, on the basis of which the Federal Government gave the number of abducted schoolgirls as 110.

“Also kidnapped were two other persons, who are not students of the college. They include a primary school boy who came to the school to sell pure water and another primary schoolgirl. That brings the total number of abducted persons on that day to 113.

Revealing the circumstances of the ceasefire that led to the free return of the captives, the minister said:  “Unknown to many, we have been in wider cessation-of-hostility talks with the insurgents for some time now. ‘’The talks helped to secure the release of the police officers’ wives and the University of Maiduguri lecturers recently. And the talks did not stop thereafter.

“Therefore, we were able to leverage on the wider talks when the Dapchi girls were abducted. As I said earlier, the insurgents decided to return the girls to where they picked them from as a goodwill gesture. All they demanded was a ceasefire that will grant them a safe corridor to drop the girls.

“Consequently, a week-long ceasefire was declared, starting from Monday, 19 March. That is why the insurgents were able to drop the girls. This counters the conspiracy theories being propounded in some quarters concerning why it was so easy for the insurgents to drop off the girls without being attacked by the military.

Blasting the PDP and other naysayers, Mohammed said:  “You are not unaware of the reaction of the naysayers – the main opposition, PDP, in particular – to the release of the Dapchi girls. ‘’What called for non-partisan celebrations was rather thoughtlessly turned into politics, bad, despicable politics that has no place in any democracy.

At times of national tragedies, countries unite. This is the norm everywhere. “Indeed, there should be a new criterion for withdrawing the registration of a party like the PDP which has failed both as a ruling and an opposition party! If a party cannot rule and cannot be in opposition, what else can it do?”