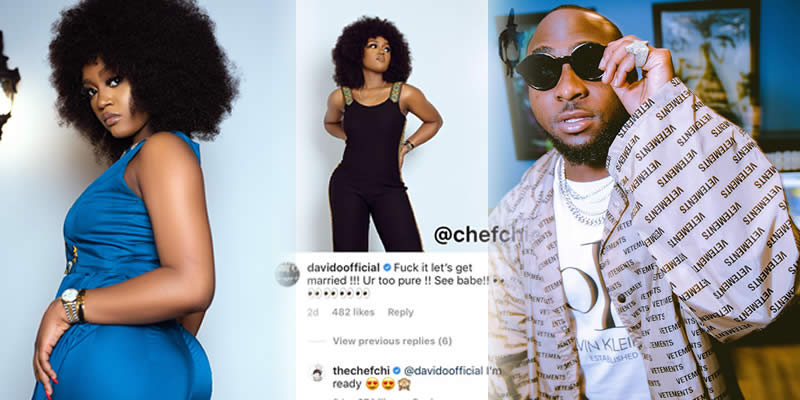 Let’s get married – Davido pops the long-awaited statement to his bae, Chioma

Davido is getting married soon! Well, that is if we are to take his social media interaction with Chioma any seriously. One thing is certain though, OBO himself just extended what looked like an engagement proposal to his bae and she said yes!

It all began with Chioma Avril Rowland, the girlfriend of the award-winning singer, sharing a picture of herself on Instagram. In the beautiful image, the 23-year-old lady wore a black jumpsuit and had a kinky Afro hair bouncing on her head.

Given the background of the image and the amazing way Chioma posed to the camera, the lovely picture of her might as well be for a modeling gig.

Upon seeing this photo, the Nwa Baby crooner slipped into her comment section to express his awe at the image and make that one request that every fan’s ears have been popping to hear. He asked her to marry him.

In his own words, Davido said Chioma was way too pure and beautiful and thus made him want to get married to her.

The Babcock University lady who must have been so thrilled by his proposal replied him with an affirmation that she would really like to settle with her Assurance boyfriend.

As it appears, Davido is indeed thinking of settling down. This is not the first time he is throwing such hints about how much he thought Chioma would make a good wife. While posing as a groomsman at a friend’s wedding, the singer had said in a caption that he hoped that he would also be hosting a marriage ceremony soon.

Again, Davido who took the time out to visit a club in Imo state where his girlfriend originated from posted that he intended to make the party hub the venue for his coming traditional wedding.

A lot of fans are excited about the prospect of Davido walking Chioma down the aisle. In fact, the Chioma’s fan page has already been decorated with this description: “Updates on Chioma Avril Rowland (Davido’s Wife).” Well, all things being equal, the huge fanbase of the musician and his girlfriend might soon get their wish. Related interesting Story; Davido reacts to troll who said money has blocked his throat