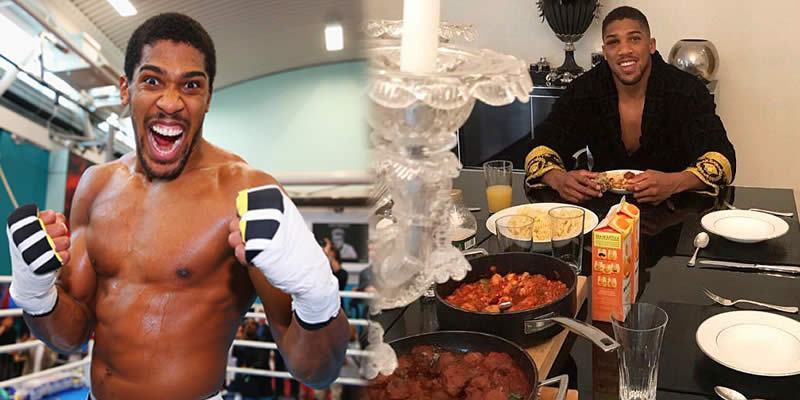 Anthony Joshua’s daily diet is enough to feed a family-of-four, The Sun reports.

Ahead of his world title fight against Alexander Povetkin at Wembley on Saturday, AJ has been enjoying his regular pre-fight diet.

That includes between 4,000 and 5,000 calories each day for the heavyweight champ.

The basis of his diet includes five eggs in the morning, among other food, two chicken breasts – the size of four regular ones – at lunch and two fillet steaks at dinner. Joshua also has a morning and bedtime snack.

It is a healthy mix of protein, carbohydrates and fats – but it comes in masses.

He told Coach, “In the past, I didn’t eat enough.

“I’d have breakfast, snack during the day and then not eat until dinner.”

READ: “I am nearly ready, give me 2 more years”- Comedian Alibaba challenges boxer Anthony Joshua as he shows off his bare chest

Ellison told The Times, “Even though he can eat a large amount of food, it has to be good quality – we can’t fuel him on junk.

“I’ve got a BMW 5-series estate and the haul from the greengrocers fills up the boot.”

This allows Joshua, who weighs around 17 stone, to recover swiftly from the huge amount of exercise and weight training he does in the months leading up to a fight.

When he wakes up in the morning at 7.30am after his 10 hours of sleep, Joshua gets his energy for the day from a selection of foods.

On some days he will train on an empty stomach as evidence suggests this can help with fitness. Related to this topic; Anthony Joshua shows off ripped physique ahead of boxing showdown with Alexander Povetkin (Photo)