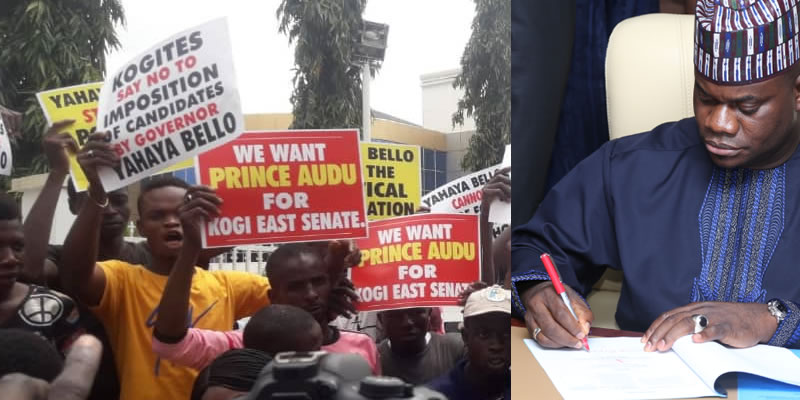 Hundreds of Kogi youths under the umbrella of Concerned Kogi APC Rebirth this morning stormed the headquarters of the All Progressive Congress, APC in Abuja to protest the alleged imposition of Candidates by Governor Yahaya .

The youths appeal to the good conscience of the All Progressive Congress (APC) to as a matter of urgency and of national interest save the APC in Kogi state from imminent disintegration due to the activities of Yahaya Bello and his cronies.

The leader of the group, Comrade Ezekiel Edogbonanya said the youths made up of dependable grassroots mobilizers in the politics of Kogi state are unhappy with the turn of events in Kogi state.

He said, “It is crucial for us to state here that in the annals of Kogi state, the contributions of the Late Prince Abubakar Audu is of immense proportion.

” As a matter of fact, the late Prince Abubakar Audu even in death represents a united and robust Kogi state because of his politics of inclusiveness that saw him defeat an incumbent governor before he passed on to the great beyond. May his soul continue to rest in peace.

“Our dear leaders, the principal reason why we are protesting here at the National Headquarters of our great party is to intimate the party that Governor Yahaya Bello who was the direct beneficiary of the goodwill and votes of our late leader, Prince Abubakar Audu has initiated a devilish and highly unpopular campaign to push the brother of the late Prince Abubakar Audu out of the race for Kogi East Senatorial District.

Benue youth protest the incessant disappearance of their manhood

“We wish to state that, this act is not only misplaced, it is also capable of causing great disaffection amongst the various stakeholders in Kogi East Senatorial and which would ultimately lead to either mass defection to the opposition party or anti-party activities”he added

Edogbonanya said It is also essential to state that, Governor Yahaya Bello, who is from Kogi Central and benefited from the votes of Kogi East is now meddling into the affairs of the Kogi East Senatorial District through his infamous and highly dubious Chief of Staff, Edward Onoja.

“Governor Yahaya Bello through his Chief of Staff, Edward Onoja, an unknown party man during the build-up to the 2015 elections, has now arrogated so much powers to himself and his cronies who were members of the opposition party during the 2015 elections, to now harass and intimidate loyal party members merely because they reaped where they did not sow and as such would have no value for it.

“They have made it a point of duty to criminalize party members in Kogi East, who differs with their brand of politics for the apparent fact that it is unpopular and capable of causing the party electoral misfortune in the forthcoming elections.

“They have vowed to handpick candidates for elective positions regardless of the electoral value of such candidates.  Suffice to add that most of their preferred candidates are very unpopular and not capable of winning elections in Kogi East.

” Our greatest worry is the fact that we are surprised at the speed with which Governor Yahaya Bello through his Chief of Staff, Edward Onoja can go to bed knowing full well that electoral defeat would be our lot should they continue to disrupt the hands of justice by criminalizing and pushing out political assets of the party to the opposition party just because of a difference in opinion on ways to move the state and the party forward”he addef

He further added that the imposition of unpopular candidates and the non-payment of salaries merely is all that is needed by the opposition to take the state in the forthcoming elections without any resistance.

“This will not only affect Mr. President but jeopardize the chances of other candidates at the polls.

” The Concerned Kogi APC Rebirth wish to amongst other things plead with the leadership of our great party to intervene and stop Kogi APC from imminent collapse by cautioning Governor Yahaya Bello and his Chief of Staff, Edward Onoja stop threatening those that have refused to bow to his majestic and imperial draconian and dictatorial leadership that has no place in today’s politics.

“We also plead with our National Chairman, Comrade Adams Oshiomohle and by extension, our dear President Muhammdu Buhari intervene before it is too late and ensure that the will of the party men and women prevail at the primaries.
In conclusion, our dear party leaders must be aware that the people are more than resolute to carry out their threat to leave the party in droves should Governor Yahaya Bello and his cronies choose to tow the path of dishonour by short-changing, replacing the choice of the people at the primaries.

“We thank you immensely, and we desire that the party leadership would look into this SAVE OUR PARTY from Collapse and electoral misfortune appeal.”he said