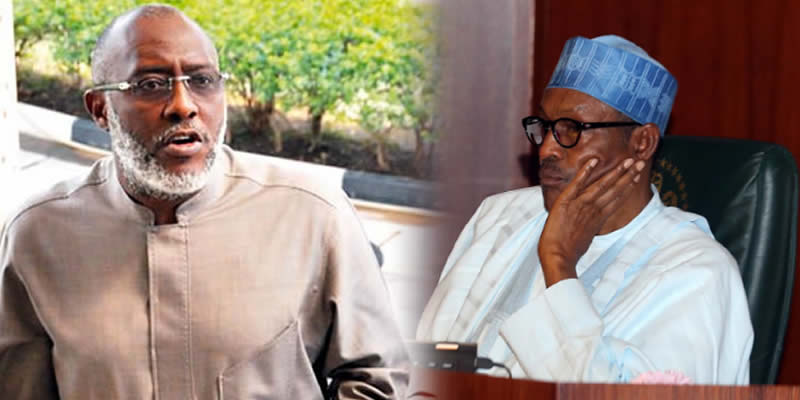 Former National Publicity Secretary of the Peoples Democratic Party, PDP, Olisa Metuh, has narrated how he offended President Muhammadu Buhari and the All Progressives Congress, APC.

Testifying before the Federal High Court in Abuja, Metuh explained why President Buhari wants to jail him.

He mounted the witness box on Thursday to personally defend the seven-count charge the Economic and Financial Crimes Commission, EFCC, preferred against him.

Testifying as the 15th Defence Witness, DW-15, Metuh said his trial was a calculated attempt by the APC-led government to silence him from criticizing Buhari’s policies.

READ: Imo 2019: Okorocha reacts to indefinite adjournment of APC primaries, reveals who will succeed him

Metuh explained in the court that top APC members had prior to the time the EFCC arrested and subsequently charged him for fraud, tried to dissuade him from attacking President Buhari in the media.

Metuh told the court that some of the APC members, met him on several occasions in Dubai, Switzerland and Paris to discuss possible roles they could play to strengthen the PDP to wrestle power from President Buhari.

According to Metuh, the top APC members, who he did not mention their identities, equally complained of Buhari’s governance style.

Metuh said, “The then National Chairman of the APC, Oyegun, publicly warned me that the APC was not happy with me and is not taking my criticisms lightly.

“Also, when President Buhari wants to engage in undemocratic practice, I will resist such by taking press men to houses of Nigerians who were unlawfully held hostage in their houses, to conduct live press conferences, and this put an immediate stop to excesses of the DSS and other security agencies.

“He informed Nigerians that his government can arrest and detain Nigerians at will, I immediately countered that he was becoming an unrepentant tyrant.

“This provoked another round of warning and threats and the then APC chairman oyegun came out again to warn that the government will no longer take it kindly with Olisa Metuh as PDP spokesman.

“The former Secretary to the Government of the Federation, Babachir Lawal, at the burial ceremony of the mother of the governor of ebonyi state, in the presence of the government delegation he led, including the Minister of Labour and then members of the National working committee of the PDP, and some other elders of the party from the South East, warned me personally that this government has decided to teach me a lesson.

“He stated to the hearing of everybody that this government will use me to set an example of how they can destroy the careers, finances and lives of Nigerians that attempt to put a clog in the wheel of their administrative tenure.

“This was the period I had just come out from Kuje prison. Upon my being introduced by the labour Minister Ngige who told Babachir, ‘I hope you know this person, Olisa Metuh’.

READ: Nnamdi Kanu – ‘There is something fundamentally wrong with the brains of those who rule Nigeria’

“My lord, with the greatest sense of responsibility, Babchir said, you are a very lucky man, we did not want you to come out of Kuje, to my shock and amazement, he stated publicly to me that this government will jail me.”

However, as the former PDP’s mouthpiece was making his case, the EFCC, through its lawyer, Sylvanus Tahir, urged the court to call the defendant to order.

The lawyer accused Metuh of delving into trivial and remote facts that were not connected to the money laundering charge against him.

The lawyer said, “My lord we have waited patiently. This court is a court of record. The court has been patient. The evidence given should be in conformity with the charge against the defendant.

“We invite your lordship to know that the charges brought against the defendant bother on seven counts. He is alleged to have diverted N400million, allegedly gotten from the office of the NSA, being the proceeds of an unlawful act.

“The other components of the charge deals with the diversion of the sum of N2 million US dollars.

“These are basically the charge for which the accused person stands trial. Going by the oral testimony of the defendant so far, this should be the fourth day.

“No attempt has been made to discuss the issue for which he is in court,” Tahir submitted.

Reacting to EFCC’s position, Metuh’s lawyer, Dr. Onyeachi Ikpeazu, SAN, prayed the court to consider the provisions of the constitution that made it obligatory for the court to give fair hearing to all accused persons.

Trial Justice Okon Abang, in a short ruling, pointed out he would determine the irrelevant part of the evidence at the end of the matter.

READ: I’ll not come down until Buhari resigns, says man on billboard hanger in Adamawa

Justice Abang explained, “It is my view that it is not out of place for the objection of this nature to be raised.

“The position of the SAN is also noted.

“I cannot at this stage determine which evidence is relevant and remote. It is like urging the court to determine a substantive issue at an interlocutory application.

“It will be at the end of the proceedings that the court will determine whether the evidence is valid or not. If the evidence is relevant, it will reflect in the judgment.”

You will also like this; Police arrest man who threatens suicide in Adamawa if Buhari does’nt resign

‘Nigeria Is Totally Backward,’ Paul P-Square Condemns His Home Country While In France