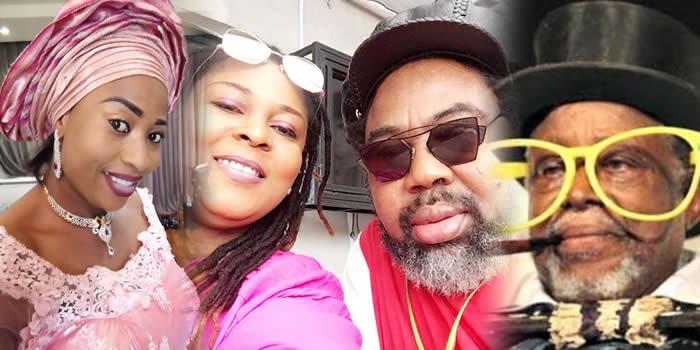 The year 2018 is fast rounding up and a lot has happened in the entertainment industry. From fairy tale weddings to naming ceremonies, endorsement deals as well as deaths were recorded.

Celebrities are loved and fans, perhaps would love to see their favorite actors live forever, unfortunately, death does not choose whether you are famous or not.

Eleven Nigerian celebrities were reported dead before the end of the year. These pained lots of family members as well as their fans. Prostitution is the oldest business in the world – Actress…

According to his media assistant, Isaac Hastrup, he revealed that the actor died due to old age related sickness.

Baba Sala was one of the pioneers of comedy movie in the Nigerian movie industry. His works cut across the borders of the African continent. He would be truly missed. Singer Ukeleke Onwubuya better known as Ras Kimono died on Sunday, June 10, in Lagos. Ras Kimono was reportedly supposed to travel to the United States (US) on Saturday, June 9, before he complained of feeling down. He was rushed to a hospital in Ikeja, where he was later referred to Lagoon Hospital on the Island where he died.

READ: The Last Moments Of Ras Kimono’s Wife Who Died The actress who had been fighting cancer went to Canada for scheduled chemo. Unfortunately, the heavy treatment badly affected her body, and her heart stopped beating. According to her colleague, Bisola Badmus, the 46-year old Aishat Abimbola died in Toronto on Tuesday, May 15. The actress had two children. She was a talented actress with a catchy smile and tremendous creativity. Among the most famous movies she took part in are Bafana Bafana, Missing Angel 2 and Emotional Crack. Complications from a fall in the bathroom made this star disappear from the Nollywood movie industry forever.

According to some of her colleagues, they disclosed that Uduak Akrah died on Saturday, August 25, at the Lagos University Teaching Hospital (LUTH), Idi Araba area of Lagos.

On August 14, 2018, the list of Nollywood actors who died recently grew by one as the well-known veteran movie star Chike Osuji passed away from a heart attack. The man who came from Umuokoro Awaka, Owerri North LGA, Imo state drew his last breath in his home. He left behind his family, a wife and four children.

A rising star, who left unexpectedly in the prime of youth, was Ezeora Nelson Oluchukwu but popularly referred to as Nelson Gold. He was not only a brilliant actor but also a screenwriter. The actor slipped into a coma and died at the age of 26. In September, rising star Actor Okwy Chukwujekwu also known as Main Bossman was reported dead. He died after having an asthma attack. The deceased was buried few weeks after his sudden demise.

On January 28, fast rising Nollywood actress Nora Nkeiruka Ugo was reported dead. She was said to have given up the ghost after a battle with an undisclosed ailment. Her close friends immediately took to their social media handles to mourn her death.

Famous film producer Chukwudi Anachina popularly known as Bambino died on June 16. He was said to have died in his sleep. He graduated from the Federal Polytechnic in Oko, Anambra state. Chris Ekejimbe, a member of the Board of Trustees of Association of Nollywood Core Producers (ANCOP) announced Bambino’s death after the late producer’s wife confirmed the death to him.

Nollywood actor Chris Ekejimbe was reported dead on Saturday, October 20. According to one of his friends, the deceased was ill for a while and may have been last seen in public at the Nigerian creative industry summit at Protea Hotel, Ikeja, Lagos, in September. He died at the Lagos University Teaching Hospital (LUTH).

He was allegedly given an overdose of malaria drug at another hospital. The drug was said to have damaged his red blood cell, causing the deceased to emaciate following which he patronized a pharmacist who Eyengho said was coming to his house to treat him.

Ypu may also like to read; Diddy pictured sitting alone by Kim Porter’s gravesite before her burial in Georgia (Photo).