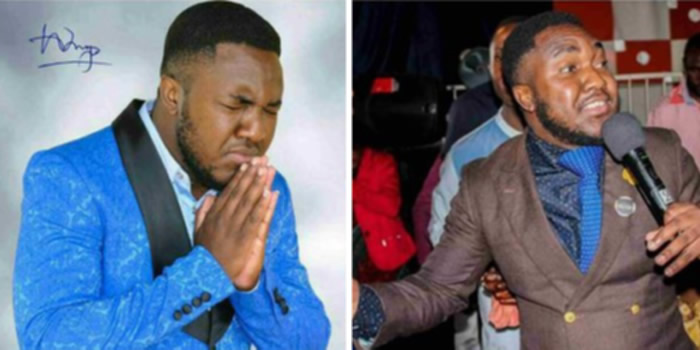 A young pastor accused of sleeping with church members, has reportedly dumped them and opted for a different woman to spend the rest of his life with.

The Marondera based Prophet in Zimbabwe, Wonderful Moyo, popularly known as Mystic One of Christ Zone Believers Chapel Church – is also accused of using church members to finance his bride price, Newsmen reports.

The members he has lost cited various reasons against the clergyman’s conduct.

The pastor is reported to have bedded two of his congregants and their affairs became the talk among the congregation forcing Prophet Moyo to dump them and proceeded to marry an outsider.

Prophet Moyo denied the allegations saying the church members left because of their own reasons.

“Our prophet fooled himself by thinking that his calling was going to be effective by marrying,” said the source. “He forced another woman who was leading her own ministry to join him and promised to marry her so as to be effective but this failed to bear fruits.

“Prophet Moyo widened his sexual eyes and proposed to another woman and it became the talk of church and smeared his preaching and this forced him to dump the two. “Church is not an organisation but an organism so Prophet Moyo took church for granted and started forcing leaders to collect money to help him pay bride price and this is what forced many to leave the church,” revealed the source.

One of the female victims he bedded confirmed dating the man of cloth saying Prophet Moyo dampened her spirit by his actions.

“I have since left the church and Prophet Moyo is now married to someone vanhu ngavachisiyana neni,” she said. “It is true that I fell in love with Prophet Moyo and he forced me to leave my ministry and join his while promising marriage as well. “He was seduced by one of the congregants and fell in love with her and it became known to church members.

Prophet Moyo denied the allegations saying some of his leaders abandoned him and started campaigning against him.

“They are not six leaders but they are many of them who have left citing different reasons. “I know there is a girl who had a problem in church and she has been telling people that I was dating her. “This girl loved me and I didn’t love her because I was dating someone at that time so she forced it to an extent that some leaders thought I was dating her.

“Some of the leaders thought I was dating this lady and we had some meetings where I told them the truth. “We asked her about the issue. I asked her to tell the truth if we dated and she said no and I think that’s where the divisions emanated from, because there are people who believed.

“I would want to know the person, as far as I know I got married on December 22, last year and I know these are the things meant to disturb my ministry and my current affair. “We are wedding in April, so when I announced it in church a lot of people were not happy and I know there are a lot of things which happened.”