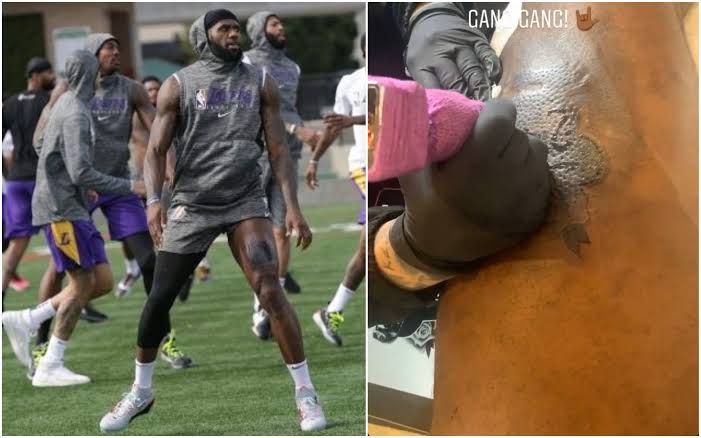 Popular American basketball player, LeBron James, has got himself inked up in honour of the departed NBA All-star, Kobe Bryant.

Bryant, considered to be one of the greatest basketball players in the game’s history, died in a helicopter crash in California on Sunday, January 26.

LeBron James who broke down in tears upon hearing the news of his friend, Brayant has got himself a tattoo as a tribute to the late legend. The ink makes sure to commemorate Kobe via his nickname, Black Mamba.

James’ left quad was wrapped up for protection on Thursday as he took part in training at the Lakers’ facility in El Segundo.

The Lakers have not played since Bryant’s death as their game against their city rivals the LA Clippers was postponed on Tuesday evening. The Lakers are due to play the Portland Trail Blazers at the Staples Center on Friday evening local time and huge tributes are expected to be paid to both Bryant and Gianna.

Following the news of Bryant’s death on Sunday, James broke down in tears after he stepped off the Lakers’ team plane. Just the day before the tragedy, James surpassed Bryant’s career NBA points record of 33,643 during the Lakers’ game against the Philadelphia 76ers.

James, who moved from Cleveland Cavaliers to the Lakers in 2018, is now third behind Karl Malone (36,928) and Kareem Abdul-Jabbar (38387) in the all-time NBA top scorers list.