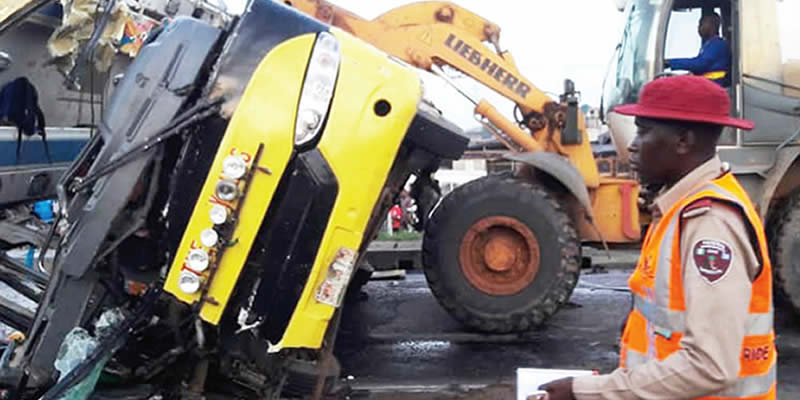 10 die as Young Shall Grow driver rams into stationary truck

No fewer than 10 passengers died while seven others were reportedly injured when a commercial luxury bus rammed into a stationary truck at the Asese end of the Lagos-Ibadan Expressway, Ogun State, in the early hours of Tuesday.

The Mercedes Benz Marcopolo bus with number plate, SMK 867 XG, was said to be heading for Lagos from the South-East when the incident happened.

It reportedly rammed into an Iveco truck with number plate, AAA 193 XP, which was said to have developed a mechanical fault and was parked by the roadside without any caution sign to warn oncoming vehicles.

While nine persons died on the spot, the luxury bus’ motor boy, identified as Ifeanyi Eze, died at a private hospital where he was rushed to for treatment.

A witness, who did not want to be identified, said the accident was caused by the driver’s recklessness.

He said, “The bus was coming from the South-East and going to Lagos. The accident happened around 5.30am in Asese. The road is narrow because of the ongoing rehabilitation of the expressway. The driver rammed into a stationary truck. One of the survivors said they had warned the driver to reduce his speed, but he ignored them. He said they even called the company’s office to complain about the man’s speed.

“Nine passengers died on the spot, while other people were injured. Some of the deceased were young people; others were elderly.”

It was learnt that the bus belonged to popular transport company, Young Shall Grow Motors Limited.

Officials of the Federal Road Safety Corps, Ogun State Traffic Compliance and Enforcement Corps and the police were said to have responded to the accident, which caused gridlock on the expressway.

He, however, said nine people died in the crash, adding that eight passengers were injured.

Oladele said the whereabouts of the bus driver was unknown.

However, the spokesman for TRACE, Babatunde Akinbiyi, in a statement sent to one of our correspondents in Abeokuta on Tuesday, said 10 persons died in the accident.

Akinbiyi blamed the accident on speeding and dangerous driving.

He said, “Ten people died in the accident. Nine died on the spot, while one died at the hospital. Among the dead was the bus driver. The vehicle belongs to Young Shall Grow. The trailer driver is at large and we are looking for him.”

PUNCH Metro learnt that while the injured were taken to Divine Touch Hospital, Ibafo, remains of the deceased were deposited in the morgue of the Olabisi Onabanjo University Teaching Hospital, Sagamu,

He said, “The motor boy of the luxury bus, Ifeanyi Eze, died five minutes after ariving at our hospital. He was among the eight injured admitted to our hospital. His two legs were crushed. Six  patients have been discharged because they had minor injuries, while one Togolese woman is still receiving treatment. The passengers said the driver had been reckless since they left Onitsha, Anambra State, for Lagos and they even called the company’s office to complain before the accident happened.”

The Chief Medical Director of OOUTH, Dr Peter Adefuye, said nine bodies were brought to the hospital’s mortuary by emergency management workers, adding that some of the deceased could be members of the National Youth Service Corps.

He said, “We learnt that the luxury bus rammed into a parked trailer on the highway. Nine bodies were brought to the mortuary; they had injuries.

“One had his head almost ruptured, while others had multiple fractures. It is possible that the deceased sat close to where the bus rammed into the trailer. Some of them appeared like youths on the NYSC scheme; they were in white tops and khakis. There were others in mufti.

“For now, the deceased are still recorded as unknown. However, the medical and social departments, with the support of the police, will search their luggage. If they have ID cards or any means of identification, we will trace their family members. This process will take one or two days. We may have to contact their families if they don’t show up.”

A customer care representative of Young Shall Grow, who did not identify himself, said he was not in a position to comment on the incident.

He also rebuffed appeals by our correspondent to be directed to the right official and abruptly terminated the call.

Meanwhile, an accident involving a truck and a LAGBUS vehicle has claimed the lives of two people in the Irawo area of Ikorodu, Lagos.

The accident was reported to have happened in the early hours of Tuesday.

PUNCH Metro gathered that the truck driver, Azeez Adeleke, in an attempt to avoid killing a pedestrian, swerved and lost control of the vehicle.

It was learnt that Adeleke collided with the LAGBUS vehicle and knocked down two pedestrians who were waiting at a bus stop.

One of the victims, Gbenga Adeniyi, reportedly died on the spot, while the other victim, Kanu Ikechukwu, died at the Lagos State Accident and Emergency Centre, Ikeja.

PUNCH Metro learnt that the accident obstructed free flow of traffic for hours.

He said, “One of the victims, Adeniyi, was trapped under a container; but the LASEMA response unit and other stakeholders were able to recover the two bodies.”

The state Police Public Relations Officer, CSP Chike Oti, noted that the corpses were deposited in a morgue for autopsy.

He said, “The DPO, Owode Onirin Police Division, CSP Benard Ediagbonya, led a team of traffic personnel to the scene.

“At the scene, it was discovered that a truck with number plate, AKD 79 XW, conveying a container from Ikorodu inward Ketu lost control of the vehicle, hit a LAGBUS vehicle and knocked down two pedestrians. Adeniyi died on the spot, but Kanu died while receiving treatment.

“The vehicles have been taken to the station, while the corpses were deposited in the Ikorodu General Hospital’s morgue for autopsy. The case is under investigation.”

You may also like; SAD! 18 NYSC members traveling from Kaduna to Lagos perish in a fatal accident in Mowe

Nigerian Army as agent of development