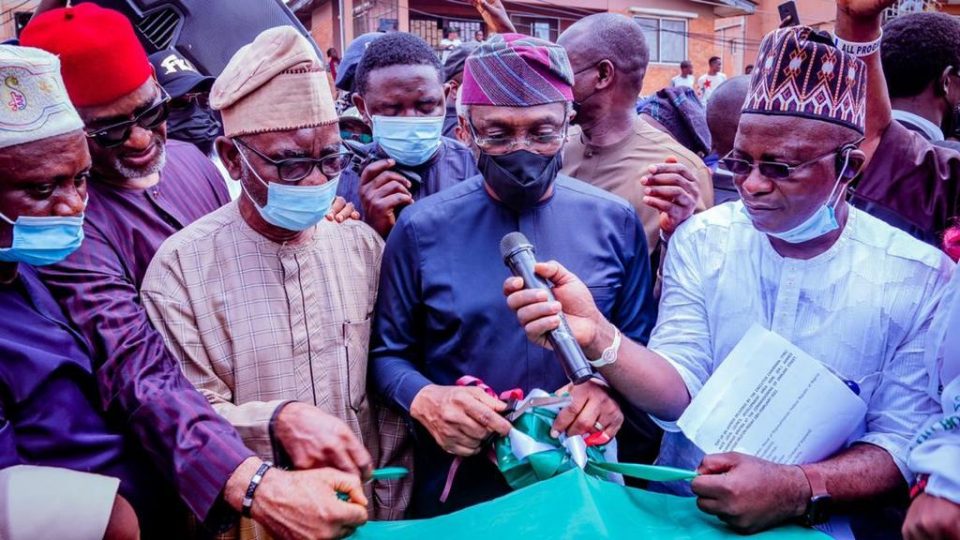 Speaker of the House of Representatives, Rep Femi Gbajabiamila of Surulere 1 Federal Constituency on Friday inaugurated four community roads in the Surulere area of Lagos State.

The News Agency of Nigeria (NAN) reports that three of the inaugurated roads, Ashimowo Bakare street, Oshogbo street, both in Itire-Ikate area of Surulere; as well as Sanya road in the Coker-Aguda area, were facilitated by him.

Apart from roads, he also inaugurated some other projects he facilitated in his Surulere 1 Federal Constituency.

Addressing residents briefly at one of the inauguration points, Gbajabiamila said he was irrevocably committed to the welfare and wellbeing of the people of his constituency.

He thanked the people of the area for their consistent support, promising to always do things that would improve their lot.

Mr Babatunde Awoyelu, Education Secretary, Surulere Local Government, thanked Gbajabiamila for the renovated schools in the area, saying it would impact positively on teaching and learning.

He also commended the Speaker’s other interventions in other schools in the area, saying he had demonstrated that he was passionate about the future of the country.

Awoyelu said the renovation of the schools was a commendable delivery of democratic dividends.

“The Speaker has given so much back to his communities as democracy dividends. All his interventions have never happened before. I want to appreciate God for allowing us this uncommon opportunity to have you as our own.”

“You have converted some of our public primary schools to a highly befitting standard more than most first-class private schools in town. We appreciate you, may God bless you”, he said.

Mr Atanda Ajisegiri, a resident of Surulere, thanked the Speaker for his interventions in the area, especially in terms of roads.

He said the Speaker had demonstrated that he was a worthy representative with the way he had consistently impacted the people.

“We thank the Speaker for all he has done and has continued to do in this area. Without a doubt, Surulere is better with Gbajabiamila as representative. We urge him to do more and we will always pray for him to succeed”, he told NAN.