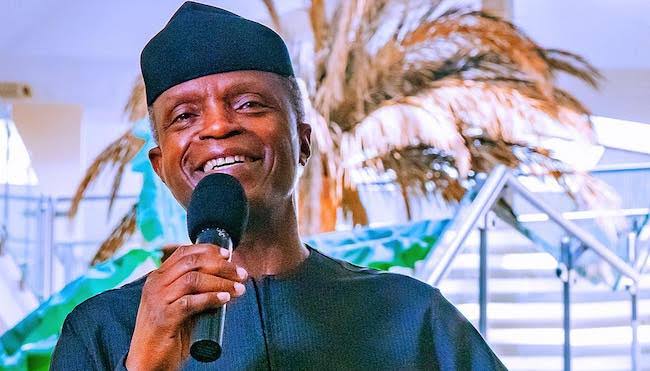 With the APC presidential primaries scheduled on Sunday in Abuja, Osinbajo addressed the supporters that made up of various grassroot  groups from across Lagos state.

Osinbajo said: “I have come home to  Lagos to thank God for all He has done and all He is  yet  to do.

“I am not here for a campaign or for consultation, I just want to celebrate with my brothers and sisters in Lagos state.

” God will help us on Sunday and we will win. There is no doubt at all, we will win by the grace of God.

“And we will go on to win the general election for our party, the APC.

” I know that we will have massive support from all of our delegates,” Osinbajo said.

Osinbajo said that haven served for seven years as the vice president of Nigeria, his  experiences would enable him provide quality leadership for the nation.

According to him, in those seven years,  President Muhammadu Buhari in many ways,   ensured that I was exposed to everything about governing a complex and diverse country such as Nigeria.

“I have also acted as the President of the Federal Republic of Nigeria at various times.”

He said God had allowed him to serve and gave him those experiences for a purpose, which definitely was to serve the nation further.

Osinbajo added: “The truth of the matter is that God does not make a mistake. That is the reason why God gave me all the  experiences and that time has come.

“I am sure that everyone knows that if you have seven years experience on anything, you will be better than those who do not have any experience at all.”

He said a greater Nigeria was achievable,  noting that all the country’s challenges were surmountable.

The vice president commended  the Lagos state Deputy Governor, Dr Obafemi Hamzat and all the delegates and representatives of different ethnic groups present at the event.

In his remarks, Dr Abdulhakeem Abdulateef, an APC chieftain, described the meeting as the beginning of the journey to a new Nigeria.

Abdulateef, an Imam, said that Osinbajo’s meeting with the stakeholders in Lagos state completed his visits to all the 36 states of the federation.

“Lagos is extremely proud to celebrate Osinbajo,” he said.

He said that Osinbajo had done a lot for Lagos state and had helped the poor to have access to justice.

Dignitories at the event include the Deputy Chief of Staff to  President Buhari, Mr Adeola Ipaye, and the Special Adviser to Buhari on Political Matters, Sen. Babafemi Ojudu.