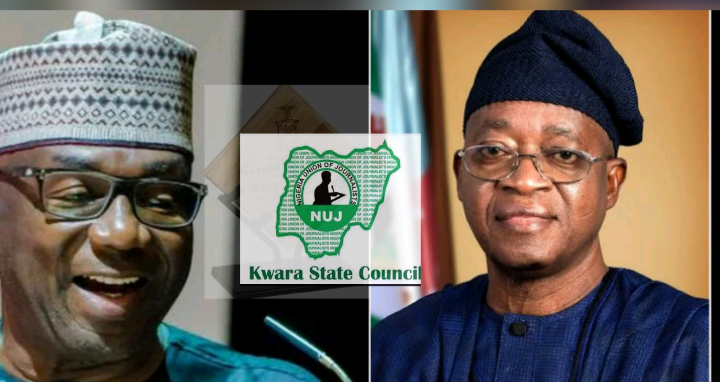 Gov. AbdulRahman AbdulRazak of Kwara and his counterpart from Osun State, Isiaka Oyetola, have been shortlisted as winners of the prestigious Awards in governance by the Correspondents’ Chapel of the Nigerian Union of Journalists (NUJ), Kwara Chapter.

This is contained in a statement signed by the Press Week Committee Chairperson, Mrs Olubukola Aiyedogbon, on Tuesday in Ilorin.

It said the award is part of the activities marking the 2022 Annual Press Week of the journalists’ union.

It said that the two-day event would be held on June 29 and 30, at the NUJ state Secretariat, Offa Road, while the award night was scheduled for E-Phoenix Hotel, opposite Federal High Court, Fate road, GRA Ilorin.

“Governor AbdulRazak has made human capital development especially in the areas of education, empowerment and gender advocacy cardinal points of his governance policies.

“To his credit, Kwara State, not only signed up as one of the Child Right Act compliant state but also currently ranks as the only state with a Gender Mainstreaming law that recommends 35 permcent public offices for the opposite sex.

“While his counterpart, Governor Oyetola emerged winner on the strength of fiscal prudence, management of conflicts and infrastructure in Osun State.

“The governor bagged  the Award  Of Excellence In Good Governance,  Leadership Ingenuity and Efficient Use Of Public Funds,” the statement read in part.

According to the statement, the Chairman of the Correspondents’ Chapel, Mallam Abdulhakeem Garba, said the award was deasigned as a yearly tradition created to acknowledge governors, CEOs, as well as commending hardworking journalists in the state who have served with distinction.

Garba said that the process of arriving at the winners of the award was painstaking, expansive and thorough.

“Governors AbdulRazak and Oyetola emerged from a list of entries solicited discretely from far and wide.

“The governors, according to the team that vetted the entries, were noted to have demonstrated rare leadership skills in governance in their respective states,” he said.