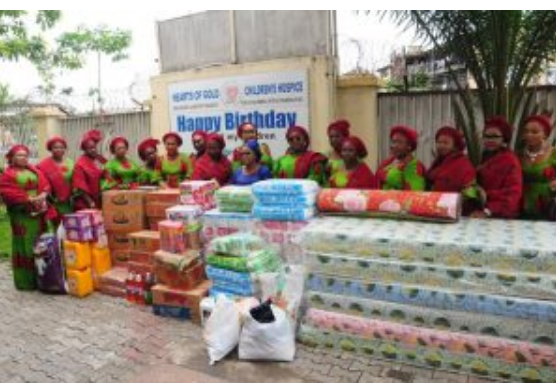 The chairperson of the association, Mrs Aisha Musa, was represented by Mrs Laraba Onyeuko during the association’s visit to the hospital of children with special needs.

Reports have ir that the several items donated include mattresses, disinfectants, pampers, clothes and food stuffs such as bags of rice, pasta, noodles, milk, Milo.

Onyeuko said that the vision of NAOWA was for the wives to support their husbands at the forefront so that they would be able to focus at the task at hand while “we also support them at home”.

According to Onyeuko, NAOWA is an organisation with charity as it’s watch word within the area of jurisdiction which covered the barrack community and the outside as well.

“We contribute in our own little way to the welfare of those within the immediate environment.

“Our husbands are out there sacrificing their lives for the peace and unity of the country so also we, their wives, are doing this charitable work to support, in our own little way,” she said.

Onyeuko also said that the roles being played by the wives in ensuring that their husbands, as senior officers and personnel of the army, were in their right minds to ensure peace and unity reigned supreme, was paramount.

“Once the home is peaceful, they will be able to give their all in their service to the country,” she said.

Onyeuko appreciated the Chief Of Army Staff (COAS) Lt.-Gen Faruk Yahaya for being passionate about the welfare of its personnel.

“This is sacrosanct because the NA officers are selfless in their duties in making sure that the integrity of Nigeria remains one,” she said.

Also, the Director-General and founder of Heart of Gold Children Hospice, Mrs Laja Adedoyin, appreciated the gesture from NAOWA as well as the hospital’s hardworking staff.

“My appreciation goes to NAOWA and to my staff who take care of the children that have special needs and children with disabilities.

“They are the ones that are the soldiers of this hospital and some of them have been here for 13 years or more, coming everyday to work.

“Since the COVID-19 started in 2020, 80 per cent of my staff have not moved out of this hospital, they have been living with us so that they can be close to the children,” she said.

Adedoyin said that she wanted more donations, with regards to medical intervention at the point of entry for the children and beyond.

She said that the hospital currently had 68 children in its care.

“This intervention will enable us at the hospital, to better manage the lives of the children in such a way that it would be near normal.

“We appreciate everyone who has donated and those who just come for visitation because this has encouraged us to do more and do better,” the director said.