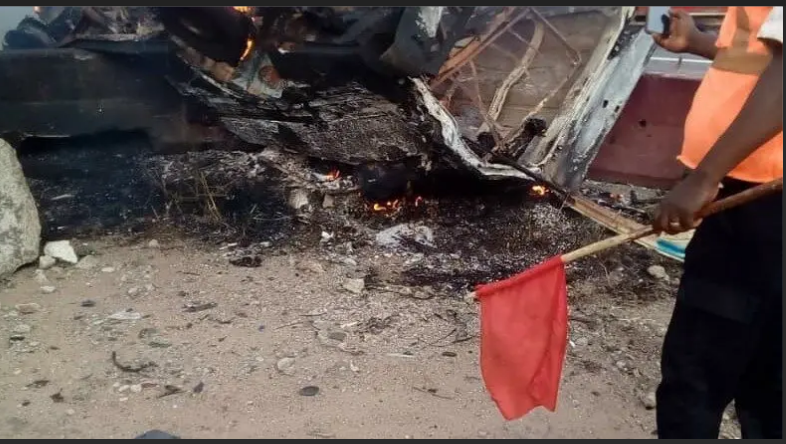 Four persons were burnt to death on Friday while 16 others sustained injuries in a lone accident involving a Mazda bus at Oniworo, Foursquare Camp area of the Lagos-Ibadan Expressway.

He stated that the bus driver was speeding excessively before losing control and ramming into the median. The bus summersaulted and went into flames.

“A total of 20 persons were involved, four burnt beyond recognition while one female and 15 men were injured.

Umar stated that the injured victims were taken to a hospital at Ogere in Ogun.

He advised motorists to always obey traffic rules and regulations to avoid crashes.

In other news, global Alliance for Improved Nutrition (GAIN) a Swiss-based foundation, has promised to partner organisations to support Small and Medium-scale Enterprises (SMEs), to promote quality nutrition of processed foods in Nigeria.

The foundation made the promise in an inception meeting organised for selected Enterprise Support Organisations (ESO) in Abuja.

This is contained in a statement signed by Mrs Yetunde Olarewaju, Planning and Communications Officer of GAIN Nigeria, on Thursday.

She said that the foundation had commenced discussion with some identified ESOs to identify targeted areas which would eventually impact positively on food items sold to low-income households.

According to her, the intervention which is under the foundation’s Nutrition Impact at Scale (NIS) programme willing also be providing the SMEs with technical expertise and access to funding opportunities.

“This will help to scale up their nutrition-filled food business through the ESOs,’’ she said.

She said that all these efforts were geared towards ensuring that Nigeria was on course to prevent high rate of malnutrition in the country.

“The rate of malnutrition in Nigeria still remains a growing concern for its citizens.

“The Global Nutrition Report released in 2021 reveals that though Nigeria has made some progress towards achieving its target for stunting, 31.5 per cent of children less than five years are still affected.

“This figure is higher than the average for the Africa region which stands at 30.7 per cent.

“It also states that Nigeria has made some progress towards achieving the target for wasting but 6.5 per cent of children less than five years are still affected.

“The figure is also higher than the average for the Africa region of 6.0 per cent,’’ she said.

She said that the prevalence of overweight children less than five years stands at 1.6 per cent and Nigeria was ‘on course’ to prevent the figure from increasing.

Olarewaju said that other interventions were developed with various stakeholders to address the issues of malnutrition, especially among low-income households.

“The NIS programme is one of the three components of GAIN’s Nutrition Enterprise Cluster.

“The programme aims at training identified ESOs on different ways will increase capacity of SMEs in food and agriculture sector to focus on improving the nutritional quality of food process,” she added.

Mr Clement Musyoka, Programme Manager for the project, said that working with willing organisations, with requisite capacity would attach nutrition lens to their work, and the impacts would be felt by the masses.

“We will leverage the work already started by GAIN to continue to bring attention to the nutrition-related issues and bring actionable knowledge and practical tools to the table.

“This will help relevant stakeholders and actors to better support and incubate SMEs to improve nutrition impacts,” he said.

Also, Mr Manasseh Miruka, Head of the Nutrition Enterprise Cluster, said that the programme would work with existing structures within the ESOs to strengthen the structures.

Representatives of the ESOs at the meeting expressed their willingness to work with the foundation to ensure that there was a decline in the statistics of malnutrition in country.