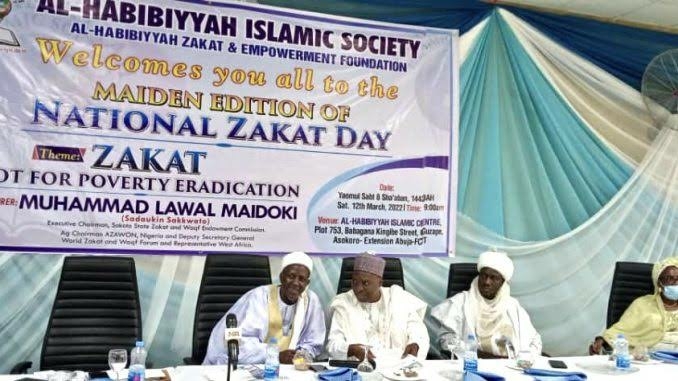 National Chief Imam of the society, Imam Fuad Adeyemi, said the exercise was in consonance with Islamic injunction to assist the poor and to obliterate poverty.

“ For every sane, adult Muslim who owns wealth over a certain amount known as Nisab – he or she must pay 2.5 per cent of that wealth as Zakat.

“Zakat is also the right the poor and needy have over the wealth of the rich,’’ he said.

Adeyemi said the society instituted the Day to raise awareness on the importance of Zakat and also to encourage more Muslims to pay it in consonance with Islamic injunction.

“Established in 2009, the Al-Habibiyyah Zakat and Empowerment Foundation, an arm of the society, has been collecting and disbursing Zakat, periodically to selected beneficiaries in very strict compliance with Islamic injunction.

“Since its inception, the Foundation has collected and publicly disbursed more than N60 million to various categories of beneficiaries with bias for education and women.

“Seventy per cent of the funds were used to buy income-generating materials such as sewing machines, pumping machine for irrigation farming, grinding and welding machines, generators, barbing and hair dressing equipment, and deep freezers,’’ he said.

Adeyemi added that the money and equipment distributed were made possible by donors.

“One of the payers of the Zakat, Hajia Safurat Niniola, the National Secretary of Al-Habibiyyah Women’s Forum, died less than three weeks ago,’’ he lamented.

He stressed that Zakat was not just a fundamental pillar of Islam, but also a concept that could end poverty.

“In addition, we believe that the many challenges Nigerians are facing today which are manifesting in banditry, kidnapping and even ritual killings, can be addressed through Zakat as income is re-distributed,’’ he stressed.

This year’s Zakat theme is: Pivot for Poverty Eradication