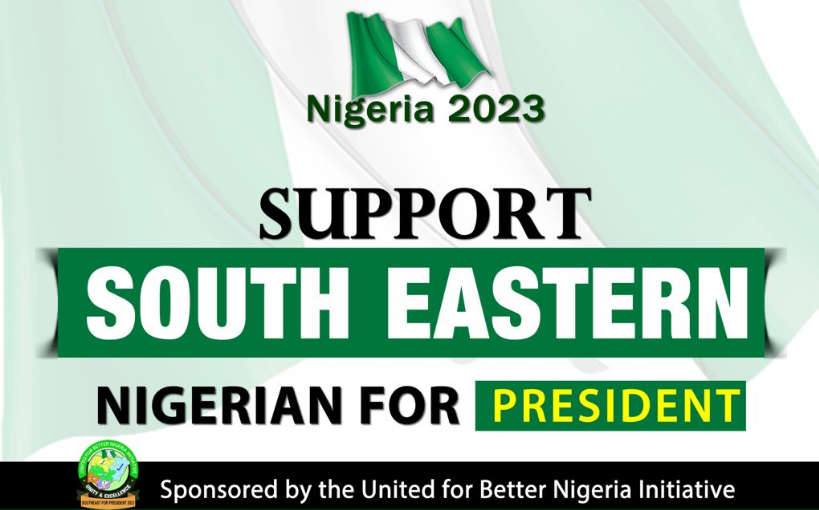 The National Coordinator of UBNi, Mrs. Nkoli Mkparu, in a statement issued in Abuja also urged the northern elders to join the pan-Yoruba social-cultural group, Afenifere, to support a president of a southeast extraction.

Mkparu, who suggested Secretary to the Government of the Federation (SGF), Anyim Pius Anyim, as the candidate said that this was in the spirit of inclusiveness and representational justice.

The News Agency of Nigeria (NAN) reports that the statement was in reaction to the outcome of the consensus arrangement by some members of the Peoples Democratic Party (PDP) aspirants from the north.

Mkparu said the controversial consensus arrangement piloted by the chairman of the NEF, Prof. Ango Abdullahi, suggested immediate past president of the Senate Bukola Saraki and Bauchi Gov. Bala Mohammed as the party’s consensus candidates for the north.

She said that UBNi faulted the arrangement because the northern elders needed to look beyond their region for a good presidential candidate in 2023.

NAN also reports that the PDP Northern Stakeholders have, however, disassociated themselves from Prof. Ango Abdullah’s endorsement of the aspirants.

“UBNi wants the elders from the north to consider the rich credentials of the former Secretary to the Government of the Federation (SGF), Chief Anyim Pius Anyim. Anyim was elected as president of the Senate at the age of 39 and has been a loyal member of the PDP at all times.”

“Having another president from another region would further marginalize Nigerians of southeast extraction because the southeast had at different times supported northern candidates to assume the nation’s number one position.’’

She noted that the unity and harmonious co-existence of interest groups within Nigeria should be considered in the overall interest of the country.

“The NEF and other northern elders should in the spirit of inclusiveness engage aspirants from the southeast zone and declare support for anyone who meets their criteria.”

“Nobody can become president by being popular only in his geo-political zone; therefore leaders and opinion moulders from other geo-political zones should concede the 2023 slot to the South East and announce their preferred candidate.’’

Mkparu said that Anyim had remained a loyal member of the PDP from inception and his commitment through good and bad times had seen him become a member of the Party’s Board of Trustees (BOT) among others.

She, however, said that a consensus agreement reached to zone the presidency to another geopolitical zone other than that of Anyim would prevent him `from clinching the party’s top job’.