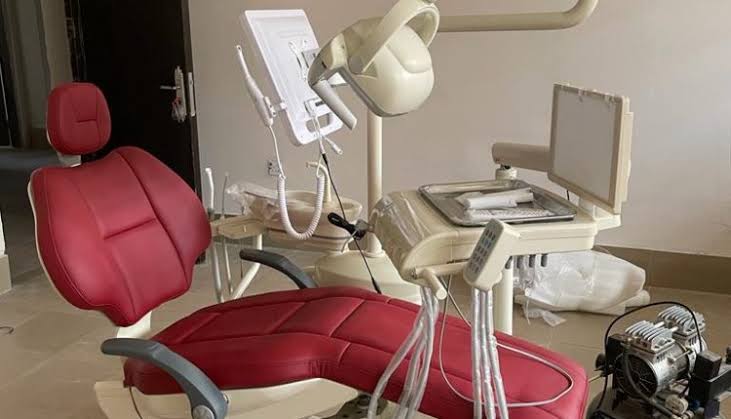 By Olumide Gbenga On May 16, 2022
0
Share
The Director-General of the state Hospital Management Bureau, Mr Sa’ad Aluko, made this known while conducting journalists and some of members of staff round the facilities on Sunday in Ilorin.
Aluko said apart from putting in place a beautiful edifice, the government has also equipped the dental clinic and the eye centre with ultra-modern machines.
“This refurbished dental clinic is meant to deliver quality healthcare to Kwarans.
”What is also critical, apart from erecting a befitting building at this centre, are the equipment that have been put in place.
”So, we now have ultra-modern equipment that are of the highest quality in the country, the standard that can compete with any private or public dental institutions in the country,” Aluko said.
He added that before now, the biggest eye centre in Kwara was at Sobi Specialist Hospital, which had to be relocated to the Ilorin General HospitaI because of the COVID-19 treatment and other technical issues.
”We now have a mega eye centre in General Hospital Ilorin here with many modern equipment that have been procured.
“We have also taken the delivery of additional dialysis machines that were procured recently; they are two brand new 2022 models.
”You know, it is the top of the range, and that has increased the number of patients coming in,” Aluko said.
He said the bureau was working round the clock to run a 24-hour service at the dialysis centre to accommodate more patients, a plan he said would be aided by the newly procured dialysis machines.
Aluko commended Gov. AbdulRahman AbdulRazaq for taking good steps to advance the delivery of quality healthcare service in the state.
“For a lot of private institutions that are doing dialysis, people get infected.
”Often times, we manage infected patients because they are infected from some of the dialysis machines outside.
”His Excellency now saw the need for us to procure additional dialysis machines, which were supplied late last year to put Kwara in a position that we can give quality healthcare services to our people,” Aluko said.
The Head of Ophthalmology Department at the hospital, Dr Taoheed Abdullahi, said the eye centre was now developed to the level that can compete in standard with any other public and private eye care centre in the region.
“Before, we were using just two rooms for the eye department where we had about three or four doctors sharing one room to attend to multiple patients, while the other room was dedicated to nurses to do lots of activities.
“But over time, the present government has shown lots of interest in ophthalmology in Kwara State by providing a befitting edifice which is fortified with many modern equipment.
”That gave birth to what we are having here today, I will say the facility is second to none in Kwara, and can be ranked second only to the National Eye Centre, Kaduna.
“Until now, we have never had a Visual field machine and Laser machine, among many others, and these are the machines that usually draw patients to the National Eye Care Centre,” he said.
Abdullahi expressed confidence that the centre can now boast of an increase in the size of referrals it gets on the basis of the quality personnel and equipment that are on ground.
He said there are ongoing plans to make the well-equipped facility a training centre in partnership with the relevant West African professional body.
“By the time the membership training for doctors starts it will attract more personnel from within and outside Nigeria, and propel the image of the state government.
”This means that kwara will soon become an epicentre in Nigeria where people will keep coming for (ophthalmologic) eye service.
“In terms of patronage since we moved into this facility we have had not less than 60 percent rise in patient patronage coming for our services.
”I believe by the time more people hear about this good development the patronage will increase,” Abdullahi said.
0
Share FacebookTwitterGoogle+ReddItWhatsAppPinterestEmail
You might also like More from author