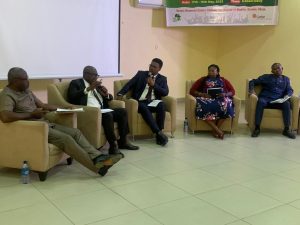 By Olumide Gbenga On May 17, 2022
0
Share
The organisations are African Faith and Justice Network (AFJN), Dominans for Justice and Peace (DJP) and Caritas Nigeria.
Mr Josiah Emerole, Director of Public Enlightenment, National Agency for the Prohibition of Trafficking in Persons (NAPTIP), one of the FG agencies, said at the workshop, organised by Caritas in Abuja, that ritual killings, cultism and violence in the society, could mainly be attributed to drug abuse.
The theme of the workshop is: “Tackling Drug Abuse, Ritual Killings & Cultism: Fashioning a Better Future with our Youths”.
Emerole said that the workshop was a response to the cry for help on the adverse effects of these destructive societal vices.
“The gathering provided an opportunity to listen to experts and safeguard the future of the youths and the nation at large.
“The specific area of focus was to bring collective experiences and talents to create awareness on the issue of drug abuse, cultism and ritual killings,” he said.
Emerole added that the workshop was aimed at developing a comprehensive workable strategy on tackling the issues, and stressed the need for accelerating efforts in doing so.
He, therefore, said some religious institutions and governments were collaborating to achieve the set targets of ensuring a drug-free Nigeria.
According to the NAPTIP official, who listed some of the problems the wrong use of drug cause, said even some men who batter their wives are mostly influenced by illicit drugs.
He explained; “We as individuals are influencers, and the level of awareness is not enough as we need to keep speaking to people about it.”
Mr Chigbu Chilee, Assistant Director of Drug Demand Reduction, and representative of the National Drug Law Enforcement Agency (NDLEA) said that everyone needed to be involved in the fight against drug abuse.
Chilee, also explained drug abuse as taking drugs without medical justification or prescription, the excessive use of socially accepted drugs and drugs that were not socially acceptable such as cocaine.
“Abusive parenting, cultural abbreviations, unemployment, poverty, depression, low self-esteem, frustration and peer pressure, are some of the reasons people get involved in drug abuse,” he said.
Chilee said the National Drug Use Survey, conducted in 2018 by UNODC, revealed that Cannabis was the most common drug used by 10.6 million people, followed by prescription opioids (tramadol, codeine and morphine), used by 4.6 million persons.
“Among every four drug users in Nigeria, one is a female, and one-in-five persons who had used drugs is suffering from drug use disorder.
“Drug use is most common between the ages of  25 and 39 years,” he said.
0
Share FacebookTwitterGoogle+ReddItWhatsAppPinterestEmail
You might also like More from author