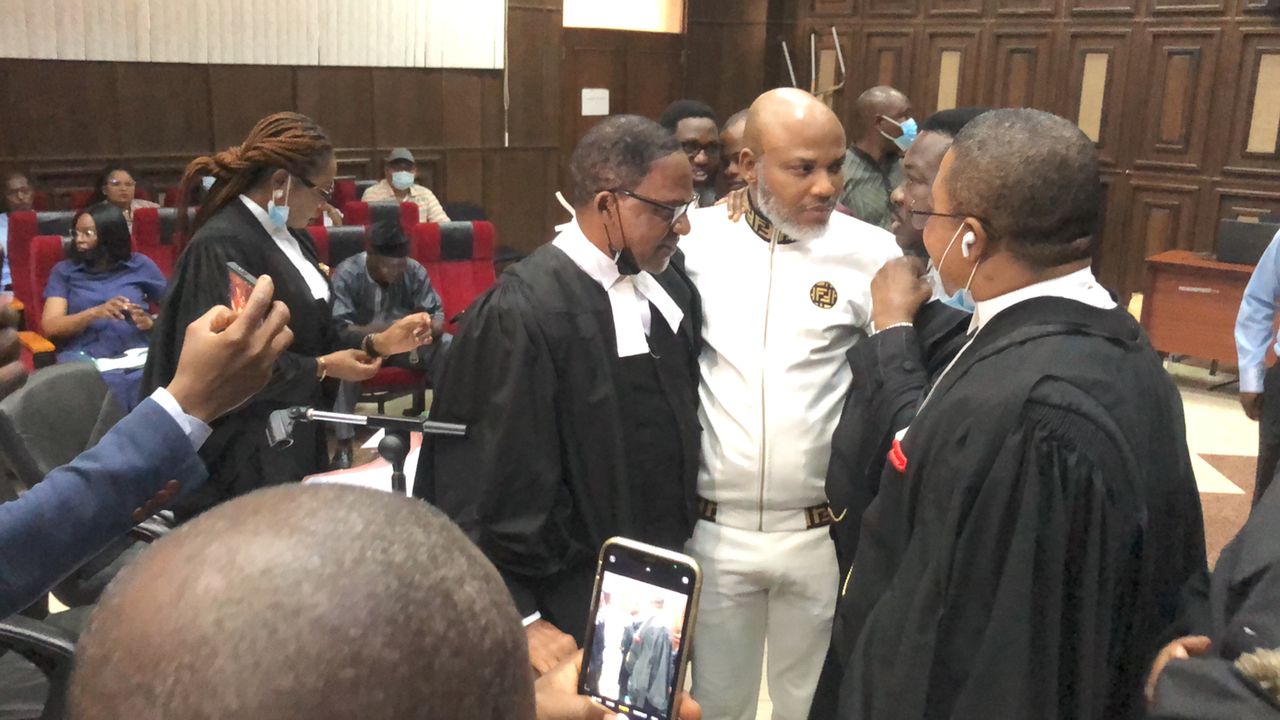 By Olumide Gbenga On May 18, 2022
0
Share
Kanu, in the application filed before Justice Binta Nyako by his counsel, Chief Mike Ozekhome, SAN, also prayed for an order setting aside the order made on March 28, 2019, directing for his arrest and continuation of his trial in absentia.
Justice Nyako had, on March 28, 2019, revoked the bail of Kanu, ordered his arrest and directed that his trial should continue in his absence.
Nyako ruled that the court gave the order because Kanu failed to appear in court after his bail was granted on April 25, 2017, and this followed an application by the prosecution.
The IPOB leader was first arrested in October 2015 for demanding the separation of Nigeria from Biafra.
He was granted bail on health grounds and was asked to present three sureties, one of whom must be a serving senator, a Jewish religious leader and a highly respected person who must own a landed property in Abuja.
The judge, then, warned him against granting press interviews, holding rallies or being in a gathering of more than 10 persons while on bail.
However, in September 2017, Kanu reportedly went missing and stopped attending court proceedings, while alleging that he decided to flee the country following an invasion of his family residence in Umuahia, Abia by security operatives.
Kanu’s disappearance stalled his trial which he was jointly undergoing along with his co-defendants.
With the development, the judge severed his trial from that of other co-defendants to stop further delay in the others’ cases.
But the Attorney-General of the Federation (AGF), Abubakar Malami, in June 2021, announced that the IPOB leader had been “intercepted” and returned to Nigeria.
Kanu, who is facing charges bordering on terrorism, has since his rearrest been on trial.
At the resumed hearing shortly after Justice Nyako rejected Kanu’s bail application, Ozekhome told the court that he had another application dated and filed on April 1, 2019.
The senior lawyer said the application was praying the court for an order setting aside its earlier order revoking his client’s bail granted him in 2017 and that of bench warrant ordering his arrest anywhere he is sighted and directing the continuation of trial in his absence.
He said the motion, brought pursuant to the court’s rules and the Nigerian constitution, was supported by a 38-paragraph affidavit and one exhibit and a written address.
But counsel for the AGF, David Kaswe, vehemently opposed the request.
Kaswe said a counter-affidavit and a written address were filed to the effect.
He argued that his objection was premised on the fact that the entire purpose for which Kanu brought the application had been overtaken by event.
“The defendant (Kanu) was challenging the prosecution to proceed and tried the defendant in absentia.
“Thankfully, he is in court. Therefore, the entire application has been overtaken by event, it has become a mere academic exercise,” he said.
The judge then adjourned the matter until May 26 for ruling and trial continuation.
NAN had, earlier, reported that Justice Nyako, on Wednesday, refused to admit Kanu to bail.
Nyako, in a ruling, held that since Kanu was earlier granted bail in 2017 and was said to have jumped the bail, the court must first determine the real reason for his action before he reapply for another bail.
“The defendant’s bail application at this point is premature, having breached all the bail conditions earlier granted him,” the judge said, directing the parties in the trial to go into the trial.
Kaswe then informed the court that he had an application which was filed the previous day.
He said the application, an amended six-count charge, had a little alteration from the earlier 15 counts which was reduced to a seven-count charge by the court on the last adjourned date.
He said though the amended charge had six counts, this should not stop the trial from going on as they were ready with a witness in court.
But Ozekhome disagreed with Kaswe.
The lawyer, who described the action of the prosecution as an attempt to ambush them, said the trial would not go on if Kaswe was coming with a new charge that his client had not even seen nor a plea taken on.
“You cannot just come to court and present an amended charge. This is the seventh times they are coming with charges against the defendant.
“Justice is not about ambushing. You are waylaying us,” he argued.
But Kaswe disagreed with Ozekhome’s submission that his action was an ambush.
The judge, therefore, cautioned Kaswe against the continued amendment of charges.
“You cannot continue to amend every day you come to court.
“You cannot just file an amended charge yesterday and I am just seeing it now, and you said you are ready to continue with the trial.
“Even if we must take it, the defendant has to take a plea,” she said, adding that “justice is a three-way traffic.”
Ozekhome, however, said that if Kaswe wished to continue with the old charge with seven counts, he was ready as well to continue with the trial.
He told the court that after eight of the 15 counts were struck out on the last adjourned date, his team had approached the Court of Appeal to determine the fate of the remaining seven counts.
“What do you want to do?” Justice Nyako then asked Kaswe.
Kaswe, who explained that he was not bringing up a new charge in the amended six counts, agreed to withdraw the new amended charge.
After Ozekhome did not disagreed with Kaswe, Justice Nyako struck out the new charge filed yesterday and ordered that the trial should continue.
0
Share FacebookTwitterGoogle+ReddItWhatsAppPinterestEmail
You might also like More from author