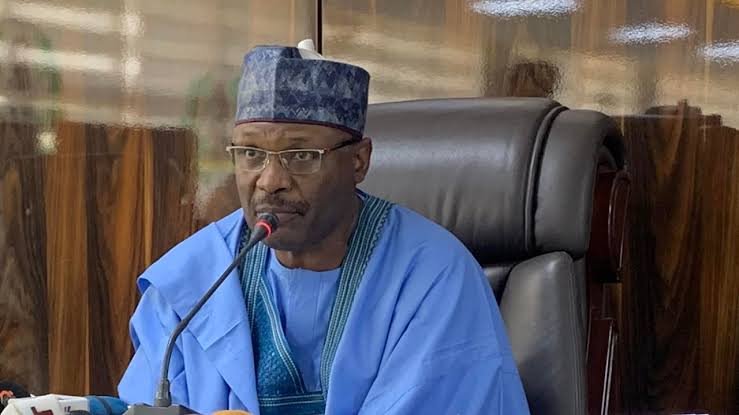 By Olumide Gbenga On May 26, 2022
0
Share
INEC Chairman, Prof. Mahmood Yakubu, said this at a one-day colloquim on Emerging Issues that will Shape the 2023 General Elections in Nigeria organised by the Centre for Democracy and Development (CDD) in collaboration with Open Society Initiative for West Africa (OSIWA) on Wednesday in Abuja.
Yakubu said that there were three critical challenges to be overcome in the conduct of the 2023 election namely insecurity, fake news and money politics.
“My third area of concern is the influence of money on politics and is becoming more present and the risk is that ours may soon become a plutocracy  for the rich rather than a democracy for the people.
“The way money is  exchanging hands is a source of concern,yes, we have collaboration with ICPC and  the EFCC and only recently  we renewed our collaboration with the EFCC, saying that we are going to do something together.
“However , there are two dimensions to it,when you have willing connectors it becomes a bit more difficult to contain the situation.
“On the one hand, you have  brilliant examples, we all saw  this on the social media in Anambra when there was an attempt to bribe  voters and they women refused to accept the money and voted their conscience,” he  said.
According to Yakubu, what political parties do is critical to what INEC does because that is what is called the  primary election.
This, he said was because the candidates that emerged from the primary elections were the ones that would  participate in the secondary election which INEC would conduct .
He noted that the commission was working with anti-graft and finance agencies to see how to curb the challenge of money politics.
He added that the commission was concerned about the security situation in the country as it  prepare for the 2023 general election because it was a major challenge.
He said that the commission has been meeting with security agencies to tackle the challenges.
Yakubu added that the commission would try as much as possible to be transparency during the elections in order not to give room for fakenews.
“I believe that the antidote to fake news is more real good news, and greater openness and transparency,we  will continue to be open and transparent,” he  said.
Former INEC chairman, Prof. Attahiru Jega said that the use of money in Nigerian politics was a source of concern.
According to Jega, frankly, the way money is used, many of us are now saying that we are moving in the direction of becoming a plutocracy rather than a democracy.
“Plutocracy is basically government of the rich for the rich by the rich.
“Imagine,the National Assembly altered the Electoral Act to increase the threshold of how much a candidate can spend for election finance.
” That is something that we should all have opposed regrettably, we were too busy with  the issue of electronic transmission and so on that we lost focus.
“We did not pay sufficient attention to what they were trying to do because they now smuggled the issue of huge financial outlays required of candidates,” he said.
Jega said that in addition to that ,many political parties, especially the so called big ones, now put huge amounts as nomination fees, which automatically excluded women, young men and people with disability from the contest.
He said that attention has to be focused  on money politics for the next cycle of electoral reform to the electoral legal framework.
“There is need to  elections less  and less costly,because otherwise  marginalised groups will continue to be excluded from the process,” he said.
He commended INEC for refusing to yield to the pressure of political parties to change the timetable for elections.
“The timetable was set under a process of very careful contemplation and in the context of the new electoral law.
” Shifting the timetable is a recipe for electoral disaster because once you shift one timeframe, it affects virtually all the others,” he said.
Mr Yabagi Sani,Chairman, Inter-Party Advisory Council (IPAC) said that political parties were in top gear preparing for the elections in complaice with the legal framework.
Sani however,complained that INEC did not carry poltical parties along before when setting the election timetable, leading to some problems.
This he said was why they were calling for extention of time for the conduct for party primaries to allow for a thorough job.
CDD’s Director,Idayat Hassan ,said that the meeting was  convened by the Centre  with the view of briefing ahead of the 2023 general elections.
“Choosing today, the Africa day to host the colloquim is instructive, for its importance  democracy.
“Parts of the country are embroiled in different forms of conflict and violence and all these threats have implications for the conduct of elections- both in terms of safety of election materials, personnel and even voters.
“This also has the potential of affecting voter turnout and the legitimacy of the result, ” she said.
She added that the  level of political violence witnessed in the last  five months was unprecedented as it was revealed that  between Jan. 1 and May 13 at least 76 incidences of politically related violence occurred in Nigeria.
“The violent incidences cuts across 24 states and the six geo-political zones of Nigeria with the North Central having the most number of incidences and South East recording the most fatalities.
“The Brand New Electoral while creating a new dawn for electoral administration do also have implications and challenges particularly as the parties grapple to comprehend and comply with the new acts. “
She said that the CDD and OSIWA organised the colloquim to set  the threshold for the 2023 General elections because Nigeria needed to get it right.
0
Share FacebookTwitterGoogle+ReddItWhatsAppPinterestEmail
You might also like More from author

Reps move against agencies for failing to appear before committee on…

Encomiums pour in for Olu Jacobs at 80