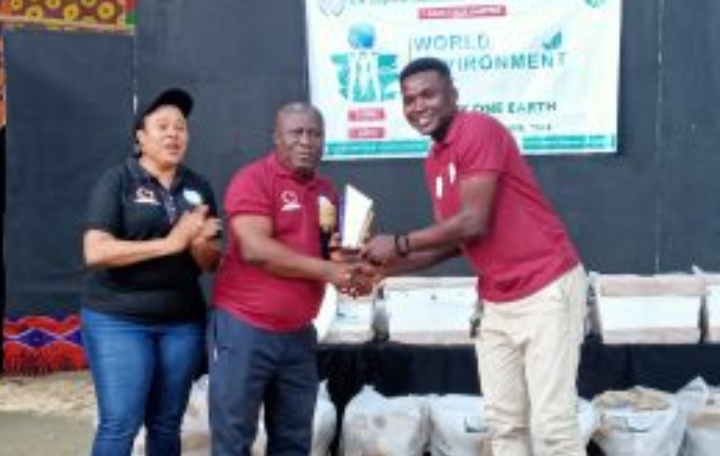 Share on FacebookShare on Twitter
Our correspondent reports that NIEE donated toilets to Footprint of David Arts Foundation Ilaje, Bariga which has a school attached to the facility, to commemorate World Environment Day (WED).
Reports  have it that they also took paper presentations on WED from school children and three students of Bright Achievers  Secondary School, Bariga clinched first, second and third positions and each received cash prizes.
Miss Blessing Ezenwekwe, 14 year old SS 1 student who came first, told our correspondent she was happy being a winner and would always be an advocate for protection of the environment.
Mr Aduragbemi Apooyin and Miss Abigail Olla who are both SS 2 students, emerged second and third.
Lagos State chapter Chairman of NIEE, Mrs Abiola Kosegbe told NAN that the institution adopted the measures to tackle open defecation and other environmental issues.
“We have on ‘Only One Earth’, one of the issues we are concentrating on is eradication of open defecation and that is why we have come to this area of Ilaje, Bariga, to donate the Water Closets (WCs) to the Footprint of David Arts Foundation Ilaje, Bariga. it is a school in the Waterfront.
“We donated 25 WCs to the school and we also had essay competitions and donated cash to winners,” she said.
On indescriminate waste disposal in the area, she said Ilaje was not properly planned hence, the waste management issues.
She said both the NIEE and the Lagos State Government were adopting measures against the menace by constantly raising awareness of safe refuse disposal, recycling and other ways.
She said that several people migrated daily to Lagos and usually settled in Ilaje and other waterfront communities to compound issues of waste disposal and management.
Kosegbe called on the Lagos State House of Assembly to enact policies that would address issues of population upsurge, refuse disposal and other issues affecting the environment.
Commenting on sandfilling, Kosegbe said there were policies regulating the practice to ensure the ground was raised above water level, adding that, the state was constantly cleaning the drains to free waterways.
Earlier, The guest lecturer, Dr James Akanmu said the Lagos lagoon would have been cleaner but people defecate in it, pour refuse and plastic while industries channel their wastes to contaminate the water and disturb wellbeing of aquatic lives.
Akanmu also decried pollution through various human activities while calling for action to mitigate impact of climate change.
He said the theme for the 2022 WED “Only One Earth”, was apt because ” environment is as the place where we do everything, live, work and play, hence the need to meet its present need without compromising the future.
“For it to be sustainable, we must meet the present need and we must not compromise the future,” he said.
He said “WED is telling us to reduce waste and if possible stop generating any through recycling, re-purposing, reuse.
“Things that we can use again are things we should be buying so that we can always reuse,” he said.
He urged Nigerians to encourage circular economy whereby things not needed could be given or sold to others instead of disposing them.
Akanmu who is the Centre Director, University of Lagos, Sustainable Procurement, Environmental and Social Standards Centre of Lagos, reeled out solutions governments at all levels must adopt.