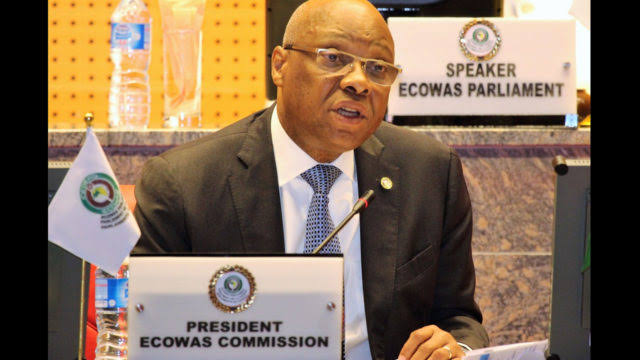 President of the ECOWAS Commission, Jean-Claude Brou has said that the Sub-region was winning in the fight against maritime insecurity, with Nigeria being removed from the piracy list hotspot.

Brou said this while delivering reports of the ECOWAS Commission before the ECOWAS Parliament at the ongoing 2022 First Ordinary Session of the Parliament in Abuja.

According to Brou, winning against maritime insecurity could also be seen with a decreased rate of attack in the Gulf of Guinea following actions by member countries.

“A year ago, I told you that the maritime insecurity in the Gulf of Guinea was extremely disturbing and globally we were the zone having the largest number of maritime piracy attacks.

“Actions have been carried by the countries individually but also at the level of regional coordination.

“And the situation has reduced slightly to the point that Nigeria has come out of the list of countries having a high level of maritime piracy.

“We will continue to work at regional level with the inauguration of our Regional Coordination Centers for Maritime Security that has been set up in the various zones.

“All together they are working actively, particularly in zone F in Cape Verde,” Brou said.

Brou said that implementation of a Regional Action Plan remained a high level priority and resource mobilisation was key.

He, however, expressed concern over the spate of terrorism in some countries which had led to humanitarian crises in the affected countries.

The ECOWAS Commission’s President said that just like how maritime insecurity was addressed, early warning mechanisms among other initiatives would be implemented to tackle the menace.

“Obviously, the fight against terrorism is a priority and it is being implemented.

“We have the Accra initiative, the G5 initiative, the Sahel initiative. The security situation as well as the food production crises create an unprecedented humanitarian crises in the region.

“In 2021, the number of Internally Displaced Persons in the region went from 4.4 million to 5.5 million, so there is a large increase in the numbers of IDPs.

“So this shows the extent of the crises facing our region because of the double burden of security and food production.

“We continue to deploy our early warning centres. Eight have been installed out of 15 and we hope to set up the remaining seven at the end of this year,” Brou said.

The 2022 First Ordinary Session of the ECOWAS Parliament from June 9 to July 2, seeks to deliberate on draft community regulations emanating from the Commission.