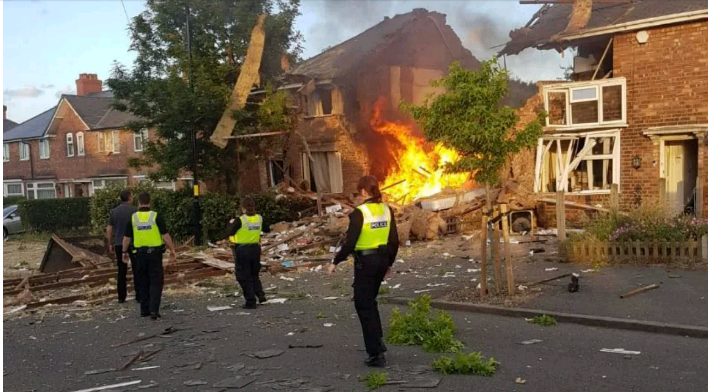 A woman has been found dead at the scene of a house destroyed by a gas explosion in Birmingham in central England, the fire service confirmed on Monday.

Emergency services have been at the site in Dulwich Road, Kingstanding, through the night following the blast, which happened shortly before 8:30 p.m. (1930 GMT) on Sunday.

One man rescued from the wreckage remains in hospital in a life-threatening condition.

West Midlands Fire Service (WMFS) confirmed the body of a woman had been found on Monday morning.

The explosion destroyed one house and significantly damaged several others as well as nearby cars, West Midlands Police said.

Residents described to the PA news agency on Sunday how they clambered past flaming debris, through dust and rubble, shortly after the blast, and pulled an injured man alive from the ruins of the house.

The area was evacuated and four other men were treated at the scene for minor injuries.

As of 4 a.m. on Monday, the fire service said good progress was being made at the scene and that a drone was being used to identify any hot spots.

WMFS said it was working with the West Midlands Police, West Midlands Ambulance Service, Cadent Gas, and the National Grid to manage the incident.