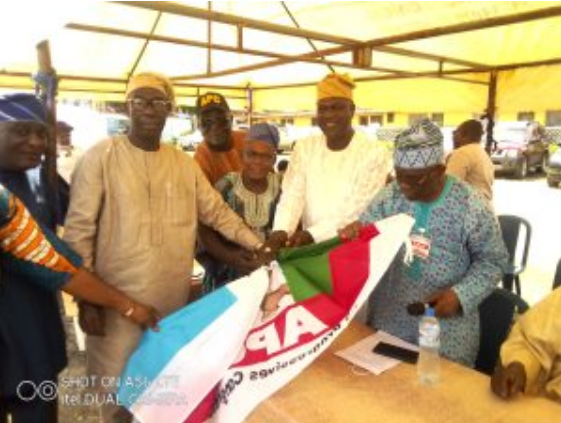 Tens of members  of the Peoples Democratic Party(PDP), on Friday defected to the All Progressives Party (APC) in Ikorodu.

Receiving  the defectors at the APC party secretariat , Prince Abiodun Ogunleye, a  former deputy governor of Lagos State, welcomed the defectors , assuring  them of fairness and equity in their new party.

“I welcome you to the our great party, APC as new members, and assure you of all rights accrued to the rest of our members.

“We will ensure that you benefit from every opportunity regarding welfare of members without sentiments” Ogunleye said.

He  urged the defectors to get their Permanent voters Card(PVC)and vote for APC in all elective positions  in 2023 general elections.

Mr Olayinka Adewale, who spoke on behalf of the.defectors ,said they were pleased with the way they were being received by members of their new party.

He said  they defected to the ruling  party owing to what he called internal wranglings  in the PDP in Ikorodu.

Adewale added that emergence of a Southerner as the presidential candidate of APC also informed their defection,saying the victory of the ruling party in 2023 would not only benefit the zone but the country .

“I am a delegate at the last PDP primaries and I was expecting the ticket to be zoned to the South.

“Today we have taken a very important step to move to APC so that we can  support candidate of our choice,” he said.

Also speaking, Mr Wasiu Adesina, Chairman Ikorodu Local Government, commended the defectors ,saying that they had made the right decision by joining APC.

He urged them to go to their respective wards and attend party meetings regularly for updates and other thlngs concerning the party.

“I am delighted to witness this event today,and to receive many PDP members to our party.

” Today I am overwhelmed and promise to ensure that they benefit from all the opportunities coming to the party,” he said.

Reports  have it that APC party leaders, local government constituted authorities and members of APC in Ikorodu central were all present at the venue.