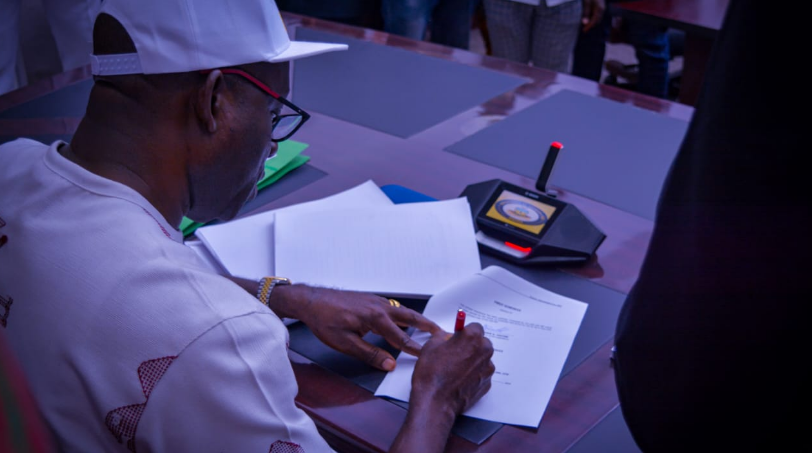 Gov. Chukwuma Soludo of Anambra, has signed the revised budget of N170 billion into law.

Soludo said that the budget christened; “Building off from the Blocks”, fell short of N250 billion, estimated as the amount required in building critical infrastructure in the state.

Mr Christian Aburime, Press Secretary to Soludo, who disclosed this in a Statement on Friday, said the governor commended the Anambra lawmakers for being diligent, responsible and responsive.

`While commending the speedy passage of the budget, the governor called for stronger synergy between the legislature and other arms of government.

“There were no underhand dealings in signing the budget, rather the process was conducted with integrity, patriotism and responsiveness,” he said.

Soludo, who said though the resources at government’s disposal were abysmally lean, and earnings from the oil sector were so low, his administration would bridge the deficit through multiple strategies, including cutting down on expenditure and prudent procurement process.

The governor said he obtained the approval to borrow N100 billion to boost available finances, for effective execution of the budget.

Soludo thanked the State House of Assembly members for understanding the exigencies in the borrowing plan, and promised that the money would be spent on critical infrastructure.

“Not all the borrowed money will be spent this year; it will be re-fenced and used for critical infrastructure development, particularly in building roads, bridges and others.

“There will be absolute prudence in making sure the people of Anambra get value for the money borrowed, and every kobo judiciously used to create wealth.

“My administration is currently cleaning up the state wage bill and the payroll system,” he said.

The governor thanked the people of the state for their support and sacrifices through payment of their taxes and other civic duties.