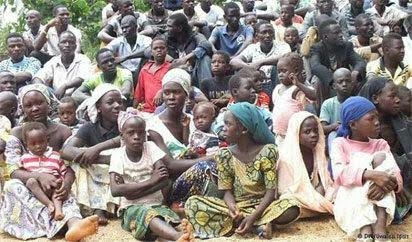 Share on FacebookShare on Twitter
Justice Inyang Ekwo of a Federal High Court, Abuja, on Friday, urged the Independent National Electoral Commission (INEC) to ensure that the Internally Displaced Persons  (IDPs) in Guma Local Government Area of Benue are captured in the ongoing Continuous Voter Registration.
Justice Ekwo made the advice after Mrs Patricia Obi, INEC counsel in a suit filed against the electoral umpire, told the court that it would be difficult for the commission to establish special registration centres for the displaced to get registered.
The News Agency of Nigeria (NAN), on Wednesday, reports that Abraham Aporugha and 30 others, on behalf of all the IDPs in the local government area, had dragged INEC before the court over alleged attempt to disenfranchise them.
The IDPs, who are plaintiffs in the suit marked: FHC/ABJ/CS/104/2022, are contending among others, that INEC’s alleged refusal to register them in the PVC exercise and provide them with polling units in their IDP camps amounted to a violation of their constitutional rights.
The plaintiffs also said that INEC is in breach of its duties under Section 10(1) and (2) of the Electoral Act and Paragraph 15(c) of Part 1 to the Third Schedule to the Constitution.
They prayed the court to among others, compel INEC to register them, issue them with permanent voter’s card and cute polling units in their camps since they have been displaced from their various homes.
Justice Ekwo, therefore, advised INEC, through Maryfrances Orji who appeared for the commission, to work on ways to ensure the IDPs were afforded opportunity to register and vote in the next general elections.
He then fixed today for the parties to report back to the court.
At the resumed hearing, Obi said the IDPs cannot be treated specially because there are so many IDP camps across the country.
She said having new registration centres for the plaintiffs would be difficult for INEC to achieve bearing in mind the financial implication.
The judge therefore asked if there are registration centres close to the camps and the lawyer responded in affirmative.

accommodate the plaintiffs.
Lawyer to the plaintiffs, Aporugha, also agreed with the court’s intervention.
The judge adjourned the matter until July 26 for report.
NAN reports that in a supporting affidavit, Aporugha stated that he is an IDP living at the IDP camp in Makurdi, Benue.
“I, along with the other plaintiffs and many residents of Guma Local Government Area, were displaced from our homes in 2018 in a wave of violence between herdsmen and farmers that swept through Uvir, Mbadwem, Mbabai, Mbayer-Yandev, Mbawa and Nyiev Wards of the Local Government Area.
“We have been living at the internally displaced persons’ camps in Makurdi since 2018.
“We could not vote in the 2019 general elections because we were not afforded the opportunity of registering a voters.
“Once again, another voters’ registration exercise is on-going, but there are no registration centres in our internally displaced persons’ camp in Makurdi to enable us register as voters.
“We do not have the finance and facilities to engage in online registration.
“It would not be possible for most of the internally displaced persons to take the arduous step of starting or completing their voters’ registration at the Guma Local Government headquarters because it is very far away from Makurdi and we do not have the resources and facilities to travel to the Local Government headquarters.
“The internally displaced persons who are in the camp in Makurdi are mostly illiterate poor farmers and are not computer savvy to be able to participate in the electronic or on-line voters’ registration,” he said