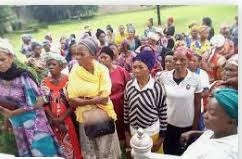 The protesters, led by Mrs Victoria Asomugha, matched to the palace of the Traditional Ruler of Ezekele Autonomous Community, Eze Godfrey Ibeakanma.

It was the second protest by the women, who had held a similar action on July 25.

In a speech during the protest, Asomugha said the women were not happy that nine weeks after Iweha was abducted by gunmen, his whereabouts were yet unknown.

“We, the Umuokpara women, Ahiasa, are not happy because of the kidnapping of our son.

“Our son went to church but he did not come back.

“We want him alive because he has a lot of work to do for us.

“We want Gov. Okezie Ikpeazu and the security agencies to please, search and locate our son wherever he is,” she said.

Addressing the women, Ibeakanma commended the women for their doggedness and concern, describing their actions as proper.

He said he had not forgotten that they thronged his palace on the same issue about two weeks ago.

He said that although the State Government, the Police and other security agencies were trying their best, they should redouble their efforts to secure the victim’s release.

“We know that the governor has tried and promised to pay N5 million to anyone that could provide the information on how our son could be found.

“Since we are alive, there is still hope because somebody is not supposed to miss in the house of God.

“It is only God that performs miracle and we expect his miracle in this matter that hurts us so severely,” he said.

Meanwhile, the Police Public Relations Officer in the state, SP Geoffrey Ogbonna, told NAN that the command had intensified its search for the victim.

Also, the President-General of the community, Mr Odimba Maduakolam, appealed to the government and security agencies to help quicken the release of Iweha.

In a speech, the victim’s family stated that it was still in shock over the abduction of their patriarch.

The speech, which was issued to newsmen by the victim’s son, Chukwudi, confirmed that a ransom was paid a day after their father was abducted.

He, however, regretted that the family had yet to hear anything from the abductors.

“As a family, we had not been able to discern the motive behind this act or point accusing fingers at anybody.

“We have our trust in God that he will return and be reunited with us in good health,” Chukwudi said.

The Nigeria Medical Association, Abia State chapter, had held several protests to also push for the release of their member.

The body later declared a strike every Tuesday to reinforce its call on the abductors to release the victim.