National award to C-G, 3 others, evidence of Customs efficiency-PRO 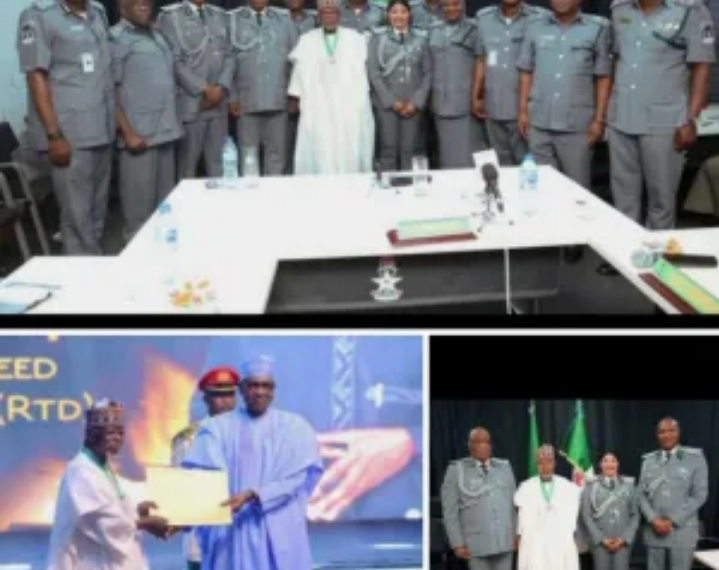 The Nigeria Customs Service (NCS), says the recent conferment of National Honours on the Comptroller-General, retired Col. Hameed Ali and three officers is an evidence of its efficiency.

The National Public Relations Officer of the service, Deputy Comptroller Timi Bomodi said this in an interview with the our correspondent in Abuja.

Our correspondent reports that Ali was conferred with the Commander of the Order of the Federal Republic (CFR).

Meanwhile, Talatu Mairo Isah, Deputy Comptroller-General of Customs in Charge of Tariff and Trade Department was conferred with Member of the Order of the Federal Republic (MFR).

Similarly, Elthon Edorhe, Deputy Comptroller-General of Customs in Charge of Enforcement, Inspection and Investigation Department was conferred with MFR.

According to Bomodi, the recognition of service at the 2022 National Honour Award Investiture in Abuja on Oct. 11, is an incentive to do more.

He said contrary to belief that the service was set up to merely implement government policies, make seizures or collect taxes, it often faced challenges in achieving its objectives.

He said,:”to be recognised by the president and the prestigious committee makes me happy and proud as a Customs officer.

“It is not easy at all. It is actually a war as most people do not want to do these things willingly.

“So, you have to develop strategies either by pleading to their sense of reason, cajoling or compelling them to make commitment in taxes or duties to government.

“Whichever strategy that is deployed, you have to think about the efficiency and effectiveness of that tactics and that is where leadership comes in.”

On how the service has been able to clean up the system to attain its present level, Bomodi said the present leadership led by the comptroller-general made it possible.

He said the comptroller-general from the beginning of his administration, set out the roadmap for repositioning the service through reforms, restructuring and increased revenue generation.

“The reforms have to do basically with a moral ethical reawakening of officers and creating platform for them to be able to do the right thing.

“In view of this, he set up Training and Doctrine Command which is pivotal in the training and reorientation of officers.

“It has helped officers to look at their performance in terms of integrity because a lot of what we do as Customs officers has to do with  personal integrity.

“He introduced certain elements that prior to this time was not there.

“For instance, we have the Customs Police, which was established to ensure that officers abide by the rules as spelt out in their conduct and they have been very effective,” he said.

Bomodi said as part of restructuring, the comptroller-general unbundled some commands to make it easier to focus on particular goals.

Bomodi said in Port Harcourt for instance, an oil and gas free trade command was created out of a command, which hitherto managed normal goods and free trade goods together.

According to him, it is changes like this that have made the system more robust, effective and easier for commands to achieve their goals.

The Customs spokesperson also said the leap in revenue generation was a major achievement that had kept the service in the limelight.

He said hitting the trillion Naira mark in 2017 was a major breakthrough, adding that since then the service had continued to record substantially high revenue generation.

Bomodi said the service had been able to keep the tempo in spite of recent global challenges like the COVID-19 Pandemic and inflation due to introduction of certain elements enabled by technology.

Reports have it that 450 people were awarded national honours at the 2022 Honours Award Investiture Programme on Oct. 11.