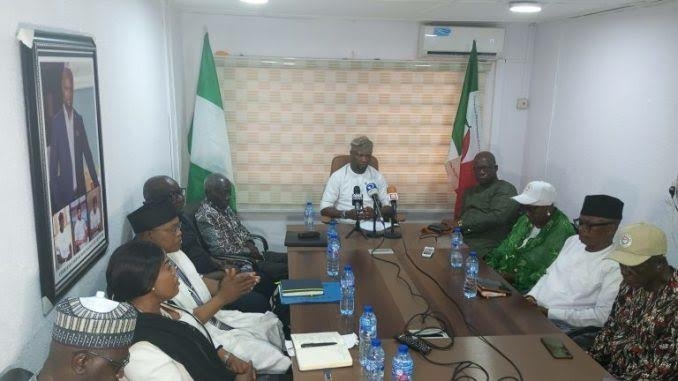 Dr Kwadu Afari-gyan, Head of the mission and former Chairman of the Electoral Commission of Ghana, made this remark on Friday when the mission paid a courtesy visit on Dr Abdul-Azeez Adediran, the Lagos state PDP Governorship Candidate and his campaign team at the  Liberty House in Ikeja.

Afari-gyan said that the need for free, fair and credible elections brought the mission to Nigeria,  to see how the process had been going and the challenges.

He said that the delegation had been talking with INEC, security agencies and other stakeholders, adding that the mission would move to various zones in Nigeria to hear from the stakeholders.

“These elections are going to be very important not only for Nigeria but for all of us in Africa and even beyond Africa. We dare not fail. To fail, it is going to spell doom far beyond Nigeria. That is how critical these our elections are.

The leader of the delegation stressed the need for  stakeholders to join hands to ensure that the nation conduct elections that would be a model for the continent.

“Most of the time, we are looking to the electoral commission, the election management body. An election is such a complex activity that many organisations have roles to play.

“At the end of the day, the way elections go depend to a large extent,  on how well various components play their roles.

“Electoral commission alone cannot achieve free and fair election. It is a collective activity,  including the government,” he said.

Afari-gyan added that the government must bring in the money to conduct free and fair election, saying “if the government fails to carry out  its responsibilities, the election wil  be deficient”.

He urged candidates in the elections to also comport themselves well, so as not to ignite violence capable of disrupting the exercise.

Afari-gyan said: “We cannot talk of elections without candidates. Candidates must conduct their campaigns, for example, in a way consistent with democratic expectations.

“The campaign must be free from violence, hate speech and abusive languages. A candidate must be free to go everywhere in the constituency to campaign and try to convince the people that  he is the best.

“Let us remember that the electoral commission is not a king maker, it is the people. In elections, we talk about the sanctity of  votes. If you cast the votes, it must be counted the way it was cast and everybody who is qualified must be given the opportunity to vote.”

He added that a lot of lessons would be learnt from Nigeria by other members of the ECOWAS, who would be having elections in 2023, 2024 and so on.

“All of them will be impacted on in one way or the other,  by what happens in Nigeria. So, please, let us commit ourselves to achieving free, fair and credible elections,” he said.

Afari-gyan asked   the PDP candidate if there were challenges in campaigns and getting his messages to the people through the media.

According to him, the team wants to know where it can give moral support and advice.

“We will talk to any political party that is willing to talk to us to know about their problems and candidates in the thick of the affairs,” he said.

Responding, Adediran, who commended the team, however,  noted that their arrival was a bit late because election was a process and not an event.

According to him, the fact finding mission should have also been in touch right from voter registration exercise to see challenges some groups faced in getting registered, saying some eligible voters were not able to register before the suspension of the exercise.

Adediran said that the delegation perhaps,  could have averted some hiccups during the voter registration if the mission interacted with relevant authorities.

“Here, in Lagos state,  we are in opposing camp because we have a government in power for the past 23 years.

“What we are doing this time is to see how we can change the narratives and give the people of Lagos state  a breathe of fresh air. I think people should have a free atmosphere to select their leaders in 2023.

“We have a couple of experiences  that  which we have taken to the  court of public opinion, especially in the area of campaign materials,” he said.

The PDP candidate disclosed that his convoy was on Sunday attacked by some suspected political thugs and people got wounded including some journalists in one of his campaign tours to various wards in the state.

“So, we thought that this nation will look at some of these things and see how we can interact with the authorities so that people can choose freely and fairly those they want to be their leaders.

“We will continue to do our best and seek votes and canvass for support from the people because people want the change,” he said.