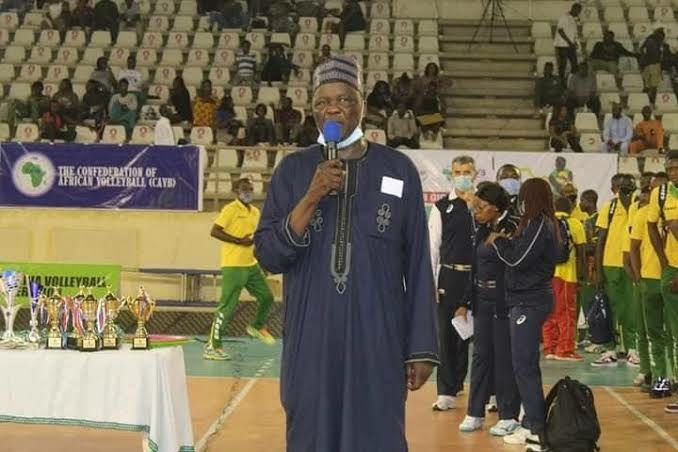 The President of the Nigeria Volleyball Federation (NVBF), Musa Nimrod, has denied claims that he went back to government to seek for refund after sponsoring the national teams to international championships.

Nimrod disclosed this to newsmen at the closing ceremony of the 2021 Nigeria Volleyball Premier League.

He said it was his responsibility to bring up the nation’s youths.

“I am not using my money, but God’s to bring up the youth. It is my responsibility to bring the youth of this nation. There is a saying that say if you build the youth, you build the nation and that’s my belief.

“It is God’s money that am using and I thank God because He has blessed me and I am returning it back as a responsibility to the Nigerian society.

“I don’t look at what I am putting in, I don’t go back to government to seek for refund after sending players to represent the country in international championships.

“I am saying it openly that I don’t go to government to seek refund,” he stressed.

Nimrod called for sponsors to support the federation and enhance the development of the game.

“We have said it again and again, this is not the first time we are calling for sponsors to come over.

He said it was “a miracle“ for the federation to host four premier leagues consecutively without any hindrance.

“That we were able to host the premier league is a miracle, it is not the president or the board members. It’s a joint work that was carried out by all the board members and the state members of federation.

“I want to thank God and appreciate the League Management Committee (LMC) for doing a wonderful work,” he said.

NAN reports that a total of 17 teams, 10 male and seven female teams, participated in the just-concluded 2021 Nigeria Volleyball Premier League which took place in the Indoor Hall of the Mashood Abiola National Stadium, Abuja.