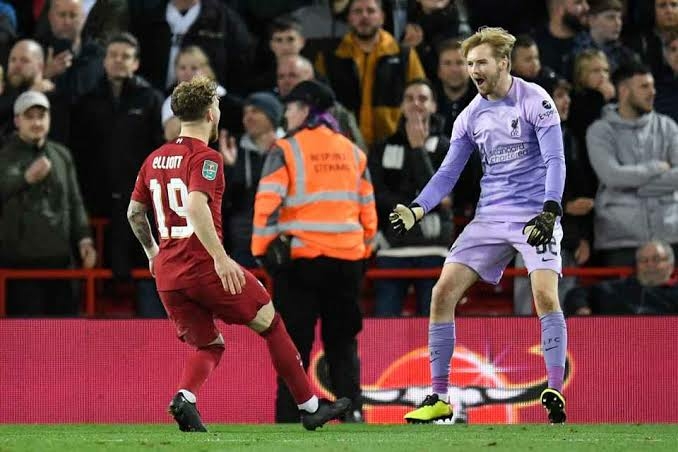 A much-changed Liverpool side needed penalty kicks to overcome League One Derby County after a goalless 90 minutes ended with the title-holders securing their place in the fourth round.

Jurgen Klopp made 11 alterations from the weekend’s victory at Tottenham, and Derby held their own in spite of the 43-place disparity in league position.

The Rams’ resistance made it all the way to the final whistle, but Caoimhin Kelleher saved three Derby penalty kicks to see the Reds through.

Liverpool’s escape keeps one of their best chances of silverware this season alive, with the Reds already 15 points behind English Premier League leaders Arsenal.

They dominated the early possession and Alex Oxlade-Chamberlain nearly gave them the lead after 15 minutes, but his powerful volley flew just wide after a corner kick was headed out to him.

The Reds continued to have the majority of the ball but they struggled to create clear-cut goalscoring chances, as Derby sat back and made it difficult for the hosts.

The Rams’ hard work was nearly undone before the break though.

Layton Stewart latching onto centre-back Eiran Cashin’s heavy touch before playing a one-two with Fabio Carvalho, though the young striker could only sidefoot well over.

Derby missed a great opportunity just after the break, Max Bird lashing wide after the ball fell kindly to him in the box.

Klopp rang the changes to try force a way through.

But the substitutions could not prevent the game going to penalty kicks, in spite of Harvey Elliott and Roberto Firmino testing Wildsmith.

Wildsmith’s opposing number Kelleher came up huge in the shootout to produce a trio of saves before Elliott stroked home to save Liverpool’s blushes.