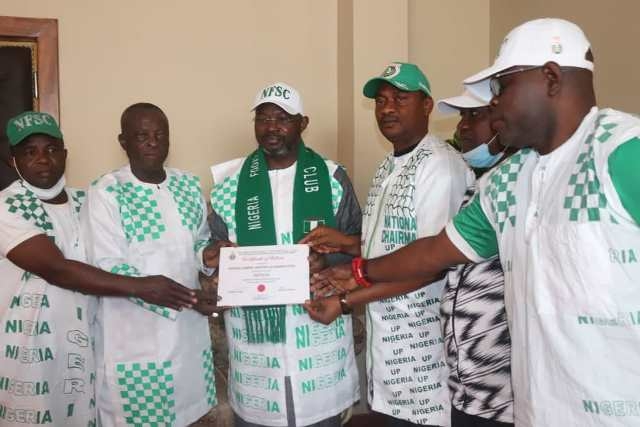 The News Agency of Nigeria (NAN) reports that Olonisakin was decorated by Dr Rafiu Ladipo, NFSC’s President-General Worldwide and the National Chairman, Rev. Samuel Ikpea, alongside other top officials of the club in Garoua, Cameroon.

Ladipo in his remarks noted that the NFSC was delighted to bestow the honour on the ambassador as its patron at a time when the Senior Football National team had made history in the 2021 Africa Cup of Nations (AFCON).

Nigeria’s Super Eagles on Wednesday in Garoua advanced in style to the knockout phase of the 2021 AFCON in Cameroon.

They beat Guinea-Bissau 2-0 at the Stade Roumde Adjia to become the only side at this 33rd edition of the competition to win all their three group games.

“Today is a day that is special for the supporters club, first of all because of the victory recorded by the Super Eagles after winning all their matches in the group stage to qualify for the round of 16.

“Indeed, it is a thing of joy that this is happening in your tenure as the country’s ambassador to Cameroon as our national football team has not achieved such a feat in a very long time.

“Whereas,  if we had played a draw or were beaten, it wouldn’t have been so sweet, but we defeated that hard-fighting from Guinea-Bissau 2-0 and we thank God for the victory.

“As it is customary, when the supporters club moves to any country of the world, what we do first is to pay a courtesy call on our ambassador as you are Mr President’s representative here.

“You represent Nigeria and this is our home because you are here,” he said.

The president-general noted that the decision to bestow the honour on the ambassador was based on his good works as well as his past records.

“Aside from being our ambassador, back home then, you were the Chief of Defence Staff which is one highly respected and coveted office preserved for a privileged few in the country.

“You were there and served so meritoriously, so we as a club have found you worthy for this reason and so many others which are too enormous to mention.

“So, this is to convey to you the decision of the president-general, national chairman, the board, executive and entire members of the supporters club, worldwide appointing you as a patron of our great club.

“We say congratulations,” he said.

Speaking after his appointment, Olonisakin stated that he was overwhelmed by the gesture, adding that the honour couldn’t have come at a better time than this when the country was in a celebratory mood.

“Today, let’s give thanks to God for the successes thus far. It is not by anyone’s ability or work, but it is God who has granted us the favour and made us secure the nine points at stake in the first round of the competition.

“I want to really appreciate all the members of the club for all you have been doing. Since I grew up to know football, I have been aware of the NFSC.

“It is a delight for me this day to be made a patron of this wonderful and excellent club that have spanned more than 65 years in the history of our nation and I appreciate you for this,”he said.

He appreciated the NFSC for the enormous sacrifices the club had made toward the support of the national football team.

“I want to on behalf of the President and Commander-In-Chief of the Armed Forces of Nigeria, President Muhammadu Buhari, thank you all for the support you have been given to the Super Eagles.

“Not only in this competition, but as far back as I can remember football exist in this country.

“I want to say that I am really delighted and grateful for your support and sacrifices you have always made to support the Eagles.

“It has not been easy I know for you, traveling the length and breadth of the world, wherever the Super Eagles is playing to support them.

“You have made enormous sacrifices to be there always,” he said.

He stressed that the importance of the NFSC could not be overemphasised, adding that the support of the club had always spurred the Eagles into action and made them achieve a lot of positive results.

“In most competitions, the moment I see the NFSC I am always delighted because I know that their presence usually gives the team more courage and will they need to win.

“Even when the game is not going in our favour, the moment the NFSC begin to cheer the team with their trumpets, drums and songs which are very peculiar to Nigeria, it spurs them into action and they are able to upturn the game in their favour.

“You have done it so many times and you have also done it in this competition and yesterday I observed you all from where I sat in the VIP box supporting the team even while the score remained goalless at the end of the first half.

“You kept supporting the team, until later in the second half when we now had the victory.

“I want to once again appreciate you for all you are doing and whole heartedly accept the honour you have conferred on me. I will continue to identify with the NFSC,” he said.