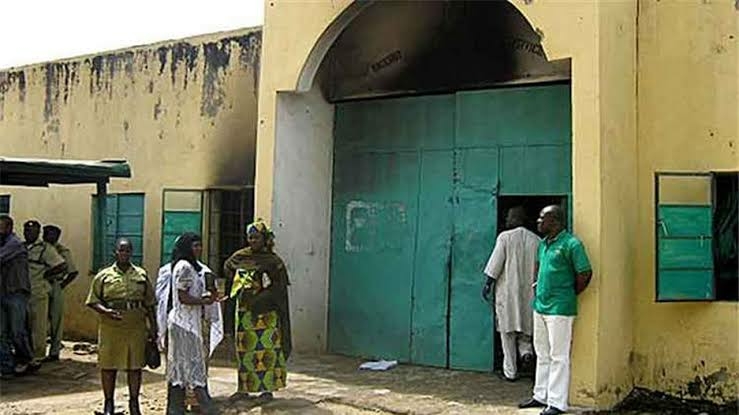 The Nigerian Correctional Service (NCoS) has said it had not banned religious activities of inmates in custodial centres across the country, as purportedly stated by those it described as ‘mischief makers’.

The Service Public Relations Officer (SPRO) Mr Francis Enobore disclosed this in a statement issued to newsmen on Sunday in Abuja.

Enobore said that it had come to the notice of management of the service, the spread of the unfounded statement purportedly, issued by the Controller General, Haliru Nababa.

“According to him, the statement is false, misleading, as it is only a figment of the author’s imagination.

“The service in fact, encourages all forms of genuine visits to inmates by relations and well-meaning individuals/group. This is in order to promote psycho-social support, which is pivotal to reformation and rehabilitation of inmates.

“To put the records straight, visits to custodial centres was temporarily suspended in April, 2021, in compliance with National Centre for Disease Control (NCDC) COVID-19 protocol in order to prevent the dreaded pandemic from spreading to the custodial centres.

“Since the pandemic has not abated but continue to mutate, with the current virulent Omicron variant still uncaged, the Presidential Taskforce on COVID-19, in its wisdom, has advised the sustenance of preventive protocols.

“This  includes, crowd control and strict monitoring of migration amongst others. Hence, the management of the NCoS is yet to relax the restriction on visits to custodial centres, “he said.

Enobore noted that custodial centres in Nigeria, with its overwhelming population phenomenon, were able to maintain zero infection status among the inmates.

“This is made possible through strict adherence to various preventive measures.

“Similarly, it would be recalled that disease outbreaks like Ebola, Cerebral Spinal Meningitis (CSM), Lassa Fever just to mention a few, have been successfully prevented from entering custodial centres in Nigeria.

“And no inmate has been lost to any of these diseases. This was possible through proactive and professional management of health issues amongst inmates,” he said.

According to him, Nababa commended the cooperation of members of the public in complying with the preventive measures.

He said the custodial centre boss also assured that the health and complete well-being of inmates in custody would continue to enjoy prime attention in his administration.

He then prayed for an end to the pandemic, assuring that all restrictions would be lifted as soon as advice to this effect was received from the appropriate authorities.