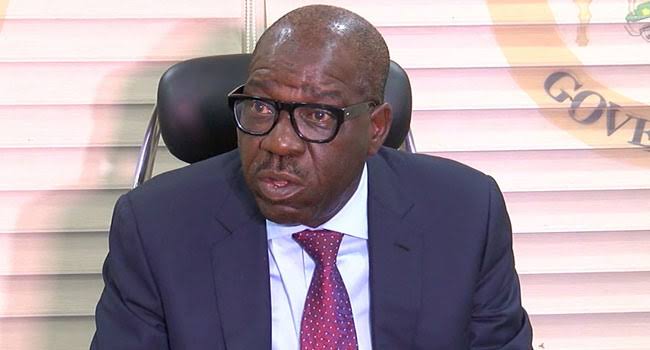 “Edo is one, irrespective of senatorial districts,’’ Obaseki said on Tuesday in Benin while swearing in newly-appointed Permanent Secretaries.

“We will not allow ourselves to be divided again; whether you are Edo South, Edo Central or Edo North, Edo is one.

“Some people just want to manipulate and try to create divisions where they don’t exist,’’ he said.

“They tell lies; they manufacture information and figures where they don’t exist just because they want to continue to divide and manipulate us.

“They have now met a government that has refused to be divided.

“Many of us share lineages across the state, so where is this issue of diving us coming from? Some people thrive when we are divided, we do not want Edo divided anymore.

“I want to tell these people who benefit from our division that they should look for another business because we will not be divided.

“We must now look for ways to organise ourselves properly and rely on ourselves internally,’’ he added.

The governor charged the new appointees to be dedicated in the discharge of their duties and urged them to work as a team.

Responding on behalf of the permanent secretaries, one of them, Mr Bernard Aigbe, thanked the governor for finding them worthy and promised that they would not fail in their duties.

He commended the government for providing 24-hours electricity in all offices.