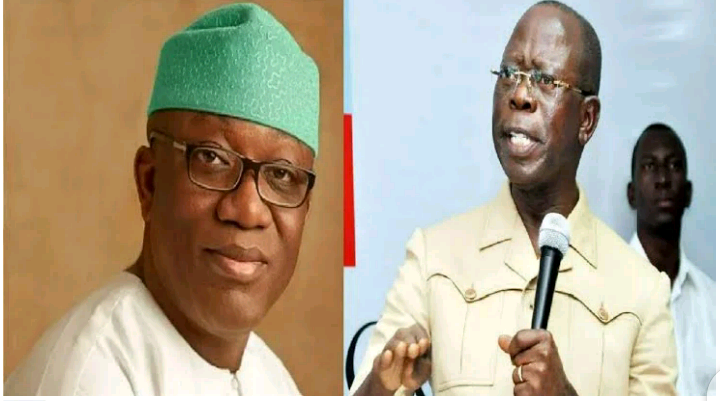 Erstwhile National Chairman of the All Progressives Congress (APC), Comrade Adams Oshiomhole, was on a national television on Monday where he made the allegation.

Oshiomhole said: “as APC national chairman, in one of the meetings I had with Gov. Kayode Fayemi he told me bluntly to my face that, `Chairman, what we are saying is, you can go and conduct election to fulfil all righteousness

“And I told Gov. Fayemi that, `that would be your own portion; not me’.

“I cannot be used as an instrument of fraud to invite people to buy forms when I have already decided, regardless of how people will vote; this is the man that will prevail.

“You want to use me for such a purpose, I said no, I said at worst, if you find the number to get rid of me, I will rather leave the job with my honour than sacrifice my honour to keep the job.’’

In the state government’s reaction, Mr Yinka Oyebode, Chief Press Secretary to Fayemi, stated that Oshiomhole’s allegation was not only false, puerile and laughable, but a figment of his imagination.

He stated that there was never a time that Gov. Fayemi asked Oshiomhole to rig any election for him or any other person and never had any reason to ask for such fraud.

Oyebode urged members of the public to disregard the allegations, saying “Comrade Oshiomhole is still experiencing a Post-traumatic Stress Disorder on account of his removal as APC chairman.’’

He stated also that Fayemi was not responsible for Oshiomhole’s removal as Chairman of the APC, adding that “he has his ward executives and the courts to blame for that.

“The Ekiti State governor has always considered Comrade Oshiomhole as a friend and political associate.

“This is even as they had fundamental differences over his kangaroo approach of disqualifying Gov. Godwin Obaseki of Edo as APC aspirant and his unconscionable autocratic management of party affairs whilst he was chairman.

“For the avoidance of doubt, Gov. Fayemi had no reason to approach Comrade Oshiomhole for favours for any election.

“Gov. Fayemi has a stellar track record of being a consummate democrat even in difficult times.

“Many Nigerians can easily recall his historic concession speech in 2014 in an election that was clearly lost to electoral sleight of hand at the behest of the then People’s Democratic Party (PDP)-led Federal Government.

“Others will also recall how Fayemi spent years in court patiently pursuing the retrieval of his stolen mandate between 2007 and 2010.

“Fayemi has demonstrated nothing but decency, decorum and fidelity to the rule of law in all his years in politics and in public office,’’ Oyebode stressed.

He challenged Oshiomhole to provide the public with independently verifiable evidence of his unsubstantiated claims, if true.

“Gov. Fayemi remains steadfast in the pursuit of his aspiration to get the APC ticket for the 2023 presidential election.

“No amount of mudslinging from disenchanted individuals would distract or discourage him,’’ the governor’s spokesman boasted.

In November 2019, the APC suspended Oshiomhole after 18 Local Government Chairmen of the party in his native Edo passed a vote of no confidence on him

His suspension followed allegations that he was trying to disintegrate the party in the state by suspending sitting Gov. Obaseki, who was seeking a second term of office.

A faction loyal to Oshiomhole, however, declared the chairman’s suspension null and void and suspended Gov. Obaseki whom they said orchestrated Oshiomhole’s suspension, instead.

Obaseki consequently defected to the PDP, picked its governorship ticket and retained his seat as Edo governor.