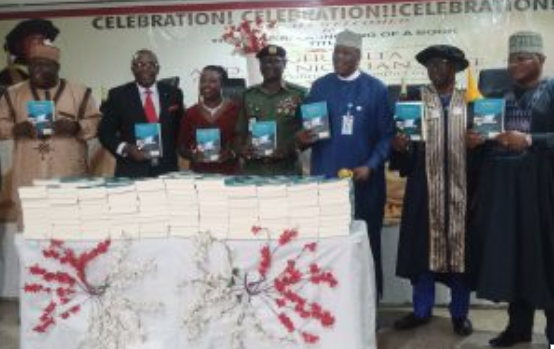 A book titled “Niger Delta and the Nigerian State: Discourses on Politic and Conflict in the Society” in honour of Prof. Chris Ogbogbo, was unveiled on Wednesday in Abuja.

The book was written by about 15 professors and mentees of the professor in recognition of his contribution to the body knowledge spanning decades.

Ogbogbo, who has taught in different universities and academies, is the current Director of Research at the Nigerian Army Resource Centre (NARC) Abuja.

The Director-General of NARC, retired Maj.-Gen. Garba Wahab, eulogised the don for his contribution to academic development and finding solutions to problems.

Wahab said the timing of the book was apt considering the mandate of the centre to proffer research-based solution for the nation’s defence and security problems.

He commended the scholars who had come together to put up a book about the Niger Delta, adding that the crisis in the region had been part of the nation’s problems.

Ogbogbo said that the book focused on the Niger Delta being the course he introduced at the University of Ibadan and taught for over a decade.

According to him, it is a very interesting piece of academic work given the caliber of academics that contributed to the book.

He said the likes of Prof. Toyin Falola among other renowned professors brought their intellectual strength to bear on issues pertaining to the Niger Delta because of the region’s importance to the country.

“Studying the Niger Delta has become a critical aspect of my intellectual enterprise, which the book represents.

“When you understand the Niger Delta has twists and turns, the struggles over resources and so on, it will help to be able to inform policy on how to engage the Niger Delta people,’’ he said.

The book reviewer, Prof. Oluranti Ojo, said the book met all academic and research standards and urged the public to read through the chapters.

Ojo, who was a Head of Department, Department of History, University of Abuja, commended the contributors to the book for the display of their academic prowess.

Report have its that the Chief of Army Staff, Lt.-Gen. Faruk Yahaya, was represented at the book launch by the Chief of Civil Military Affairs, Maj.-Gen. Marcus Kangye.