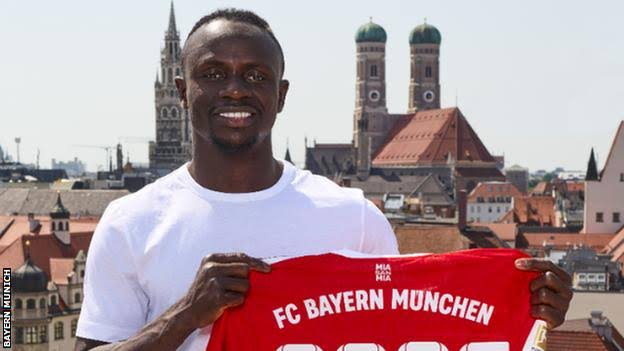 The 30-year-old Mane arrived in Munich on Tuesday for the mandatory medical and then put pen to paper on the high-profile deal until 2025 on Wednesday.

His official presentation is scheduled to follow later Wednesday.

Neither Munich nor Liverpool gave figures but the transfer fee has been estimated at 32 million euros (33.7 million dollars) which can rise to 41 million euros with add-ons.

The Senegal captain joined Liverpool in 2016 from Southampton and won all titles on offer with Jürgen Klopp’s Reds, scoring 120 goals in 269 games for them.

“Mané is a global star, who underlines the appeal of FC Bayern and will increase the attractiveness of the Bundesliga as a whole.

Mane said: “I’m really happy to finally be at FC Bayern in Munich. We spoke a lot and I felt big interest from this great club right from the beginning.

“So, for me, there were no doubts. It’s the right time for this challenge. I want to achieve a lot with this club, in Europe too.”

The transfer is a big statement of intent from the 10-time reigning Bundesliga champions.

Both are contracted one more year.

The situation could make Bayern Munich chiefs reconsider their tough stance on Lewandowski who has said on several occasions that he wants a summer move, amid strong interest from FC Barcelona.

Bayern Munich’s Chief Executive Officer (CEO) Oliver Kahn has insisted that the 33-year-old must stay, but they could now reconsider if the price is right.

The signing of Mane is also seen as a boost for their board member for sport, Hasan Salihamidzic, and also for Kahn who has only been in office for a year.

“It’s great that our board led by Oliver Kahn and Hasan Salihamidžić have managed to sign a player like Mané for FC Bayern,” Hainer insisted.

Salihamidzic said “we are proud to have brought him to Munich” as he named Mane a perfect addition to the squad that wants to win more trophies in Germany and Europe.

“Everyone knows his outstanding technical qualities as well as his incredible mentality. He will contribute a lot and help to lead our team, which has a great structure.

“The fact that he’s joining FC Bayern shows that he and our club have big aims,” he said.

“Mané fits perfectly with the football that FC Bayern play under Julian Nagelsmann.”