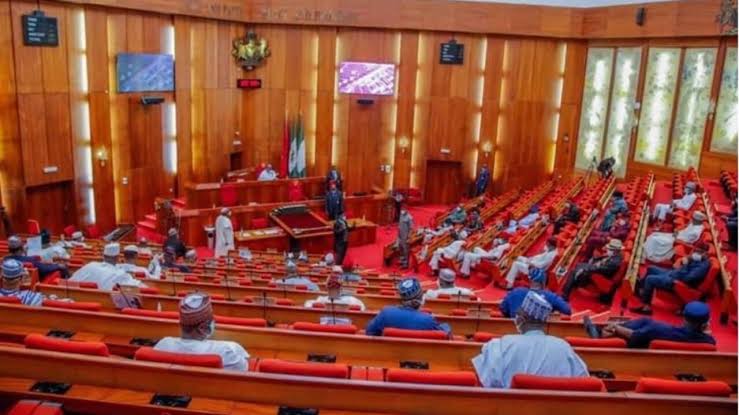 Nigeria Senate, on Wednesday at plenary, screened and confirmed all the seven ministerial nominees sent by President Muhammadu Buhari on June 21.

Buhari had in a letter that conveyed the names of the ministerial nominees to Senate, explained that the confirmation request was in accordance with the provisions of Section 147 subsection 2 of the 1999 Constitution of the Federal Republic of Nigeria, as amended.
Out of the seven nominees screened and confirmed by Senate, three were excused from taking questions from lawmakers.
This was because of their legislative background and experience, in line with the tradition of the Senate, while four of nominees answered questions from the lawmakers.
The nominees excused from questions  at the screening  were Goodluck Nana Opiah (Imo), Umar Ibrahim El-Yakub (Kano) and Ademola Adewole Adegoroye (Ondo).
Those who responded to questions included Henry Ikechukwu Ikoh (Abia) Umana Okon Umana (Akwa Ibom), Ekumankama Joseph Nkama (Ebonyi) and Odum Odi (Rivers).

Responding to questions earlier, Ikoh, a nominee from Abia,  promised to contribute to development of the nation’s economy, if confirmed, given his background in the private sector as an  industrialist.

On how jobs could be created for the teeming unemployed youths, Ikoh re-emphasised the need  for the  establishment of modular refineries, to refine the nation’s crude oil locally.
This, he said, would help create more  jobs and ultimately grow the economy further.
He also advocated the deepening of partnership between the  Federal Government and the private sector, to create more industries.
This, he said, would also result in the creation of jobs.
He said there was need to  ensure that graduates of tertiary institutions, posses technical knowledge that would enable them become Job creators, especially in the local communities.
Responding to questions on how to improve the  revenue  and foreign exchange earnings to Nigeria, the  nominee from Akwa Ibom, Umana Okon Umana, said the free trade zone was a veritable platform to improve the nation’s revenue earnings.
He advised that effort should be made to  improve Nigeria’s  production  sector for export,which would enable the inflows of  foreign exchange .
The nominee from Ebonyi, when asked how he could contribute to youth development, given his youthful age, said there was need to ensure a national re-orientation for the youths, on get-rich-quick mentality.
According to the 46-year old nominee, the youths  should be encouraged  and enabled to seek for the numerous opportunities in the country, instead of focusing on government jobs.
On the ASUU strike, he said there was need for the  Federal Government and ASUU  to come to the round table, and reach a compromise on workable terms of resolving the strike.
He also said there was need to provide  more budgetary allocation to the education sector.
President of Senate, in his remarks after the screening  and confirmation, congratulated the ministerial designates  on their confirmation by the Senate.
Senate thereafter adjourned  shortly for a tea break to return to plenary to pass the votes and proceedings.
0
Share FacebookTwitterGoogle+ReddItWhatsAppPinterestEmail
You might also like More from author