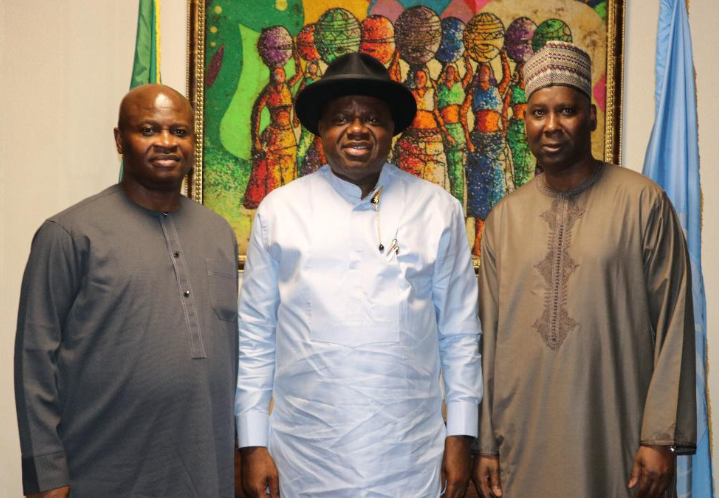 Gov. Douye Diri of Bayelsa will showcase the state’s rich economic and cultural resources at a two-day Ijaw diaspora convention slated to hold in New Jersey, U.S. starting from Saturday.

Reports have it that Diri, a prominent Ijaw son, who is in the U.S. for economic and cultural mission to two states of New York and New Jersey arrived on Tuesday.

Diri is in the two states to market the rich resources of Bayelsa to foreign investors with the purpose of attracting Foreign Direct Investment (FDI) to the state in different sectors of the economy.

“We came here on a two-prong visit, to bring Bayelsa State to the U.S. and to the world, as a state that is ready and prepared to attract FDI and as a State that is culturally very strong, bringing our culture to the world.

“Bayelsa State has been known as hub of oil and gas. The commercial oil operations began in a community call Oloibiri in Bayelsa State as far back 1956.

“The world is now moving away from crude oil to cleaner energy.

“We have abundance gas resources and in fact, we have more gas reserves than the crude oil. So, investment opportunities abound in the state,” he said.

Our correspondent reports that Diri has been meeting with different individuals and organisations to discuss investment opportunities to Bayelsa and to partner in the areas of health, energy and technology, among others.

Diri told Muhammad-Bande that he was so glad to visit the Nigeria House, saying, “I have been hearing about this Nigeria House.

`We want to thank you for the warm welcome we received from you since we arrived U.S, at the Permanent Mission and the Nigeria Consulate in New York.’’

Governor of Bayelsa State, Douye Diri presenting a canoe-carving wooden art, a symbol of Ijaw resilience to Amb. Tijjani Muhammad-Bande, Nigeria Permanent Representative to the UN when he paid the representative a courtesy call in his office.

He also commended Egopija on the services the Consulate had been rending to Nigerians in the U.S.

Earlier, Muhammad-Bande and Egopija welcomed Diri and his entourage to Nigeria House and briefed him on the strategic roles of the two missions to the Nigerians living in U.S and to UN.

They commended the governor for his commitment in driving investments into his state and urged him to tap into the existing bilateral relations between U.S. and Nigeria to attract more investments.

The duo assured him of their support to carry out a successful outing in the two states of New York and New Jersey.

Reports have it that the U.S. is the largest foreign investor in Nigeria.

According to the U.S. International Trade Administration, the Foreign Direct Investments are in the oil, mining, and wholesale trade sectors.

In the Northeast, the States of New York and New Jersey stand out as States with great economic potential.

The GDP of the state of New York is about two trillion dollars and if the state were an independent country, it would rank as the 10th largest economy in the world.

In the second quarter of 2021, New Jersey had the 8th largest economy of the 50 states as measured by GDP.

Over the past 25 years, New Jersey has ranked among the top six states and has relied heavily on service and technology-based industries.