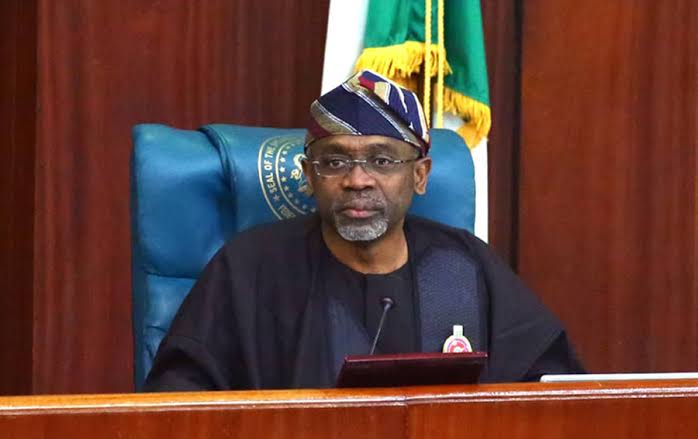 By Olumide Gbenga On Jul 2, 2022
0
Share
Gbajabiamila gave the commendation on Friday in Amagu, while inaugurating some of Ogah’s projects in his constituency.
Represented by Rep.Abdullahi Abdulkarim, Gbajabiamila said the House was proud of the great things Ogah had done for his people.
He called on politicians to emulate Ogah, who, he said, had done a lot to make his constituents happy through life-enhancing projects.
“The streetlight projects, rural health care centres, communities civic centres, water boreholes among others constructed and rehabilitated by Ogah, are true reflections of democratic dividends.
“We are happy that such feats were accomplished by our member and we urge the people to judiciously utilise them,” he said.
He urged the people and Nigerians in general to procure their Permanent Voters Cards to ensure that credible leaders were elected in the 2023 general elections.
“It is constitutional for people to procure their PVCs and vote during elections and Ogah is also performing his constitutional obligation of enjoining the people to obtain such.
“It is heartwarming that leaders from all spheres of the country are united in urging the people to procure their voters cards,” he said.
The Chairman of the Ebonyi Traditional Rulers Council, Chief Charles Mkpuma, thanked Ogah for providing such Infrastructure to the people, noting that it had not been witnessed from a lawmaker before.
“The construction of civic centres across communities in the constituency would deepen the people”s cultural heritage and the state’s traditional institution is gratified.
“We are particularly impressed because the usual notion we hear is that lawmakers do not do projects.
“We are assuring Ogah that the people would always support him no matter the period he intends to serve them at the national assembly,” he said.
Ogah in his remarks, noted that his passion to uplift the people’s wellbeing made him construct and rehabilitate such projects.
“I have been engaged in acts which enhance the people’s wellbeing before I became a federal legislator and will continue doing so to make the people comfortable.
“I urge the people to procure their PVCs to guarantee the protection of their future,” he said.
Some of the projects inaugurated include the street lights project at Ohatekwe Amagu in Ikwo LGA and the primary healthcare centre, Enyibichiri, also in Ikwo.
The Civic center at Orinte, Ezza South LGA, various water borehole among other projects were also inaugurated.
The occasion was also used to celebrate the federal lawmaker’s 46th birth anniversary, on which occasion he donated gifts to orphanages and gave free petroleum products to commercial motorcycle riders.
0
Share FacebookTwitterGoogle+ReddItWhatsAppPinterestEmail
You might also like More from author