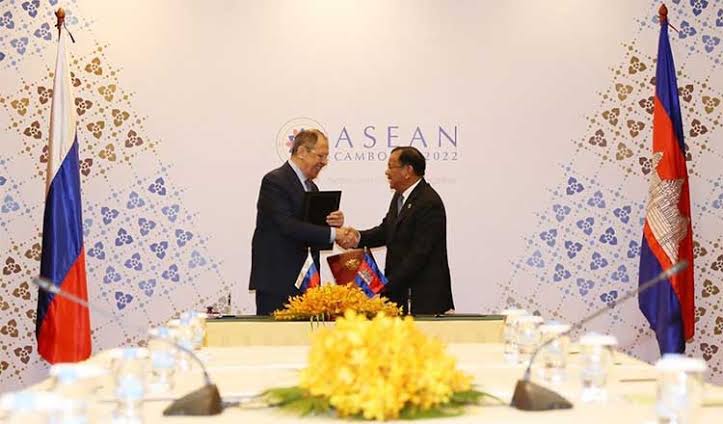 By olumide On Aug 6, 2022
0
Share
The deal was inked between Cambodian Deputy Prime Minister and Foreign Minister Prak Sokhonn and Russian Foreign Minister Sergey Lavrov on the sidelines of the 55th ASEAN Ministers’ Meeting and Related Meetings in Phnom Penh.
According to a joint statement released after the signing ceremony, the two ministers agreed to promote further the development of long-lasting and time-tested bonds of friendship and mutual support between the two countries.
“Cambodia and Russia will maintain and intensify political dialogue, regular contacts between the governments, parliaments, local authorities and political parties,” the statement said.
The two countries will enhance mutually beneficial cooperation in trade and investment, science and technology, education and culture, defense and security.
The countries agreed to create favorable conditions for activities of organisations and companies in all the areas.
“Cambodia and Russia will continue to respect legitimate interests of each other in bilateral relations and within the framework of regional and international fora,” the statement added.
The ministers also agreed to promote mutual support on key issues on international and regional agenda, with emphasis on strengthening ASEAN centrality in the context of expanding multilateral interaction in Asia-Pacific space.
0
Share FacebookTwitterGoogle+ReddItWhatsAppPinterestEmail
You might also like More from author