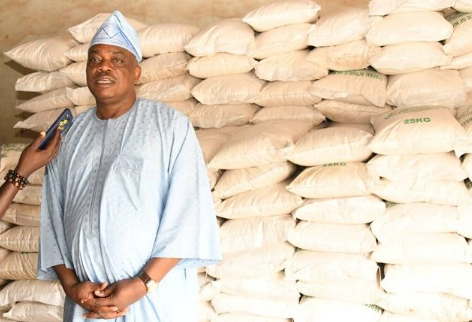 The Federal Government donated food items to Ondo State on Tuesday as part of efforts to cushion the effect of inflation and the rising cost of foodstuffs.

He said the 35 other states of the federation also received similar assistance after a needs assessment by the Federal Government.

Adesola said the donation was in line with the social intervention programmes of the Federal Government to prioritise the welfare of the people, particularly as the nation was faced with myriad challenges.

He noted that other social programmes would be facilitated in the course of the year to support farmers, encourage agriculture amongst the youth, and boost productivity.

“The essence of this donation is to demonstrate in clear terms, the care and concern of the administration of President Muhammadu Buhari for the people of the country.

“Responding to a needs assessment which indicated growing concerns about scarcity and high prices, the Federal Government directed the release of foodstuffs from the strategic reserves to be distributed in the states.

“The Federal Government has been implementing some social intervention programmes.

“Recall that we just collated about 150 names of people to benefit from the conditional cash transfer programme. The collation was done in collaboration with Ondo State government.

“Under the Presidential Youth Empowerment Scheme, we also collated names of about 200 youths in the state to benefit from the various empowerment programmes of the Federal Government,’’ he said.

Aiyedatiwa, also chairman of the state’s Emergency Management Agency, thanked the Federal Government for reaching out people in the 36 states of the federation.

“On behalf of Gov. Rotinmi Akeredolu, I thank you for this gesture.

“It is a clear outreach to touch the lives of the people, especially for those facing hardships one way or the other.

“This will go a long way to support some families and I want to assure you that the food items will definitely get to the intended beneficiaries,’’ he said.

Aiyedatiwa said the Ondo State government would continue to support the social intervention programs of the Federal Government in the interest of the people.