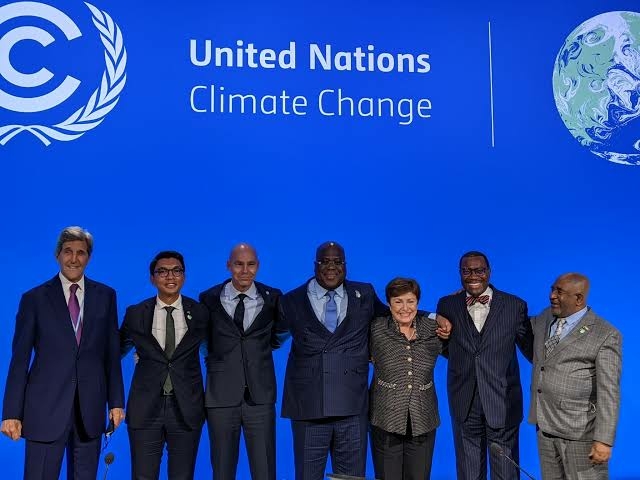 African and other global leaders have stressed the urgency of climate adaptation funding for the continent.

In a statement from the Communication and External Relations Department, African Development Bank (AfDB) on Wednesday, the call was made at the just concluded Climate Adaptation Summit which took place in Rotterdam, Netherlands.

The meeting was unanimous about the need for concrete action and finance.

Speaking, former United Nations Secretary General Ban Ki-moon and Global Centre on Adaptation (GCA) Co-Chair said: “The world has a fever. It burns hotter and higher with every day that passes. Statistics tell us that Africa is where the fever is at its most intense and people at the most vulnerable.”

Also speaking, Feike Sijbesma, GCA Co-Chair and Honorary Chairman of Royal DSM spoke about the importance of support from the global private sector.

Sijbesma said 80 per cent of the funding for adaptation needed to come from the private sector in both the developed north and the developing south.

“Investments in global climate adaptation cooperation are a big opportunity for countries like the Netherlands to share some of our best innovations with those who need them the most.

“The Africa Adaptation Acceleration Programme (AAA-P) will be a crucial vehicle for triggering far greater business investment across Africa into green and resilient solutions.

“This is a collective effort, we need every sector, every contribution possible to see off the climate crisis in Africa, and the private sector, in particular, has a massive role to play.”

However, GCA Chief Executive Officer Patrick Verkooijen emphasised the disastrous impacts of climate change hitting all parts of the world. Verkooijen said Africa was resolute about its economic advancement and would not stop.

“Adaptation in Africa is like climbing a mountain. With all of you here today, we have the dream team that will climb the mountain together.”

He added: “The next summit after today is Sharm El-Sheikh, the Africa COP. But success in Egypt will hinge on whether Africa’s needs are met or not.

“Africa has the commitment and the plan. That plan is the Africa Adaptation Acceleration Programme (AAA-P).

“It is Africa-developed and Africa-owned. It was launched by Africa’s leaders, who are here today. It is the vehicle for delivering the Africa Adaptation Initiative.”

Meanwhile, the African Union Chairperson President Macky Sall of Senegal expressed disappointment at the absence of industrialised country leaders at the summit.

Sall said the very least the African leaders expected was that their European counterparts, whose countries are among the world’s biggest polluters, would also have been present at the summit.

In agreement, UN Deputy Secretary-General Amina Mohammed said: “A bird only flies with two wings, and the representation at this table is lopsided.”

Mohammed added that Africa contributed very little to global carbon emissions and pondered on what the situation would have been if the roles had been reversed.

She said the COP26 Glasgow pact was at risk of failing if the developed world did not make good on its promises of delivering 100 billion dollars a year for climate action in developing countries.

In his intervention, President of the AfDB, Dr Akinwunmi Adesina reminded participants that the African continent was warming faster than any other region of the world.

Adesina explained that Africa did not have the resources to tackle climate change.

The AfDB chief said the continent received only three per cent of global climate financing.

He said: “The current climate financing architecture is not meeting the needs of Africa.

“New estimates by the African Economic Outlook of the African Development Bank show that Africa will need between 1.3 and 1.6 trillion dollars from 2020 to 2030, or 118 billions dollars to 145 billion dollars annually to implement its commitments to the Paris Agreement and its nationally determined contributions.”

He further added that the upstream facility at the GCA had already helped to generate three billion dollars of mainstream climate adaptation investments by the AfDB, from agriculture to energy, transport, water, and sanitation.

Adesina spoke of the bank’s African Development Fund (ADF), its concessionary lending arm, as one of the ways to address the climate financing gap.

He also said the 16th replenishment of the fund, currently underway, presented a unique opportunity of providing 12.5 billion dollars to finance the AAA-P.

He further explained that the ADF had introduced a Climate Action Window that would hopefully mobilise four billion dollars to 13 billion dollars for climate adaptation for the fund’s member countries.

“This will be used to support 20 million farmers with access to climate resilient agricultural technologies, access of 20 million farmers and pastoralists to weather-indexed crop insurance, reviving one million hectares of degraded land, and provision of renewable energy for about 9.5 million people.”

Speaking about the role of trade in climate adaptation, Okonjo-Iweala said trade policies should be integrated into global climate action as an amplifying force for financing and other climate-related support provided to vulnerable economies.

The summit’s five-point Communique highlighted that Africa was at a tipping point and emphasised that success at COP27 would depend on whether the needs of Africa are met.