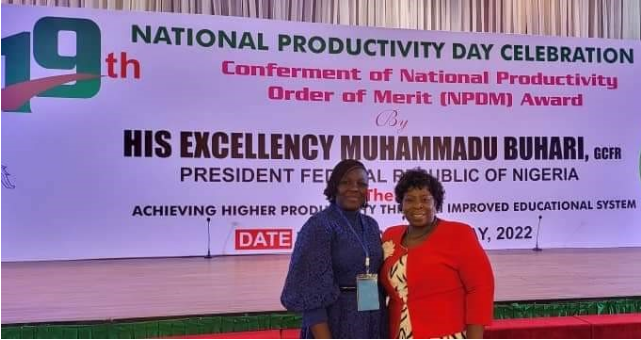 The award was presented by President Muhammadu Buhari at the 19th edition of the National productivity Day (NPD) which took place on Thursday at the Banquet Hall of the State House, Aso Rock Villa, Abuja.

The Lagos State Commissioner for Education, Folasade Adefisayo, who expressed joy over the feat recorded by the state, said that Elusakin had done the state proud for setting a standard at National Level.

“Mrs Elusakin has been a committed, resilient and dedicated teacher whose significant contribution to the success of students under her tutelage remains indelible.”

“The award was a pointer to the fact that dedication and commitment to the teaching profession does not go unnoticed,” she said in a statement on Sunday issued by Mr Ganiu Lawal, Asst. Director, Public Affairs Unit, Ministry of Education.

The statement noted that the award, which according to the President Buhari, is designed to stimulate productivity consciousness, reward innovation, dedication and hard work.

Adefisayo described the development as a memorable feat and ascribed the success of the award to Gov. Sanwo-Olu’s education transformation agenda backed with massive investment in capacity building and welfare of teachers in the state.

“The governor has earlier rewarded the duo of Mrs Elusakin and late Pius Ikuseyidunmi with two and three bedroom apartments respectively in 2021 for emerging Y2019 Outstanding Teacher and Best School Administrator in Nigeria.”

“He has been deliberate and purposeful through the annual Teachers Merit Award by appreciating and celebrating teachers efforts in raising the younger generation of Nigerians. The governor rewarded teachers and school administrators across various categories with 13 cars in Y2021 and the process for the 2022 edition is almost concluded,” she added.

The commissioner commended Elusakin and several other teachers in her category for their dedication, diligence and contributing their quota to improving the standard of education in the State.

According to her, the governor’s intervention has empowered teachers in the state with consequent enhancement of quality education delivery to the students.

Adefisayo recalled that the performance of  students of the state at the 2021 West African Senior School Certificate Examination, which recorded 79 per cent pass rate, was an indication that the administration of Mr Babajide Sanwo-Olu could be adjudged successful in raising the standard of education in Lagos State’’

She reiterated that the state government would  not relent in its commitment toward providing quality education as well as regular training, capacity building and welfare of teachers.

This is so that they could be equipped with the requisite skills for optimal performance in line with international best practices.

Also, the over joyous Elusakin, also a former teacher, lauded the government for recognising her achievement, particularly for recommending her for the national award.

She commended Gov. Sanwo-Olu for having teachers at his heart and providing them with an enabling environment to be the best.