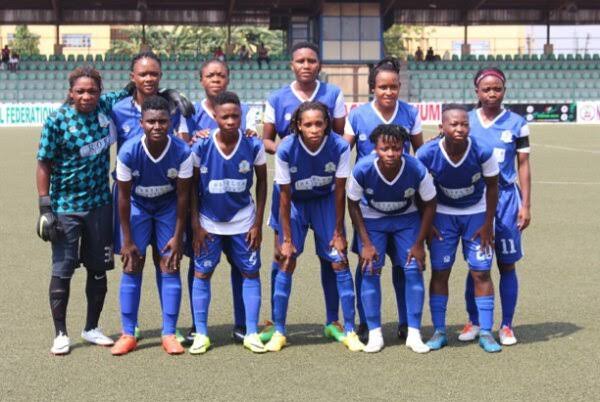 Delta Queens football club has filed a petition against Bayelsa Queens, alleging that the Bayelsa team fielded an ineligible player at the ongoing Super 6 tournament, organised by the Nigeria Women Football League (NWFL).

The petition, dated May 18, 2022, and signed by the Secretary of Delta Queens, Alero Pinnick, accused Bayelsa Queens of registering and fielding one Gift Monday in the matches prosecuted by the team at the ongoing tournament.

The News Agency of Nigeria (NAN) reports that Bayelsa Queens defeated Delta Queens on Thursday by a lone goal, scored by the debated Gift Monday in one of the matches at the ongoing NWFL Super 6 tournament.

Part of the letter reads, “Permit me to refer you to Article 11,9 of NWFL league rule book of players rules that says, “A player shall only register and play for one club in the league during a season, except if properly transferred to another club within the season; provided that a player may not play for more than two clubs within the same season.

“May I also inform you that, Natasha Witika of Konak Belediyespor, a Zambian player, but presently playing for Bayelsa Queens FC, did not meet the eligibility of Players’ Rules on international transfer, being that the transfer window has closed in January 2022, and Natasha came into Nigeria three (3) weeks ago.

“In view of the above, we implore the management of the NWFL/Super 6 to use their good offices to act according to the stipulated rule.”

Delta Queens had argued that the Bayelsa women’s football outfit had signed and were featuring Gift who had played for both Rivers Angel’s and parent club FC Robo in the current 2021/22 NWFL football season.

Gift who already has six goals at the Super 6 competition held in Benin City, Edo state capital, represented Rivers Angels in the CAF women’s Champions League and the first stanza of the ongoing NWFL season.

She later returned and represented FC Robo in the second stanza of the current campaign.

Reacting to the development, former Chairman of the Nigeria Premier League, and Bayelsa United FC Chairman, Victor Baribote, told NAN that Bayelsa Queens cannot be held responsible if there were infractions at all.

Baribote said NWFL was the body responsible for clearing players and not the clubs.

He also said that FIFA has given football federations an option to adopt and adapt rules provided they conform with the laws governing football.

“Such rules, however, does not give clubs or league organisers the right to go against FIFA laws,” he said.

When contacted, Mr Dapo Sotumimu, Head of the Media Department at NWFL, described the issue as “technical”.

Sotumimu said anyone or club complaining about any player’s ineligibility should simply write officially to the secretariat of the league organisers.