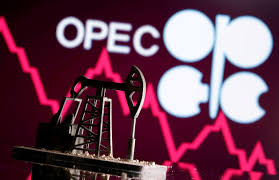 The downside, however, remained capped by signs of tight global supply and expectations of increased demand as China eases its COVID-19 restrictions.

Benchmark Brent crude futures dropped by 0.7 per cent to 116.75 dollars a barrel, while U.S. West Texas Intermediate (WTI) crude futures were down by 0.8 per cent at 115.92 dollars.

However, the planned production increase came at a time when the demand outlook is clouded by many uncertainties.

Recession warnings were coming thick and fast, with Jamie Dimon, chairman and chief executive of JP Morgan Chase, describing the challenges facing the U.S. economy as akin to a hurricane down the road.

In focus later today will be U.S. employment data for May.

It is believed that weak data could sway the Fed towards a less aggressive policy path.